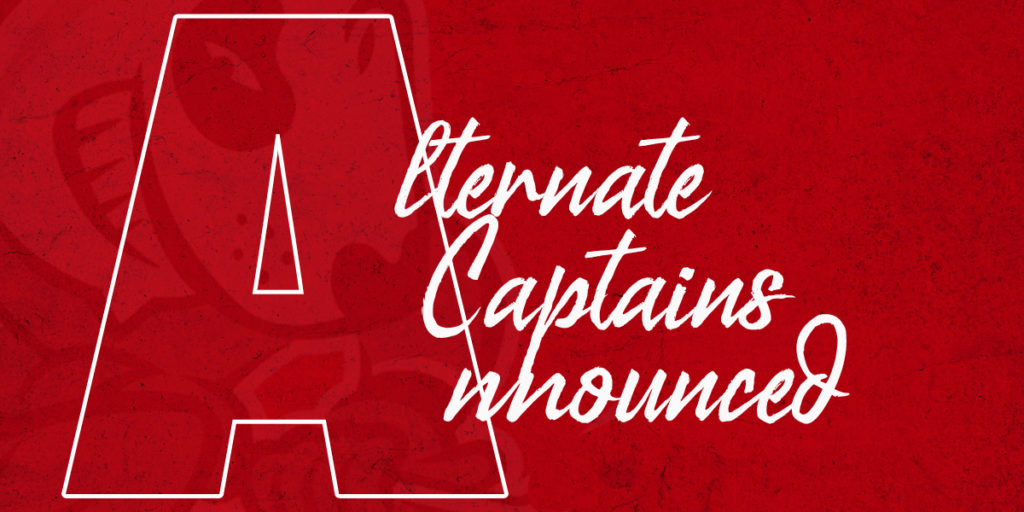 “Having been with all 4 of these guys for 3 and 4 years now, it is incredibly rewarding to see the outstanding young men they have become” said Burke “I could not be more proud of all of them.”

“Philip Tomasino was handed nothing as a 16 year old and earned every opportunity he was given.” Burke continued. “Last year he took his game to another level establishing himself as an elite player in all of junior hockey. He will be leaned on heavily this season, has a tremendous work ethic and is a great role model for our younger players.”

Entering his third season in Niagara, Tomasino is expected to play a veteran role, especially in the offensive zone. In 128 OHL regular season games, Tomasino has scored 39 goals, and collected 57 assists (96 points).

“To be apart of the leadership group we have this year is awesome” said Tomasino. “I’m so honoured to be given this opportunity, and I’m excited for what the future holds!”

Overage defencemen Elijah Roberts and Drew Hunter will be leading a young group on the backend.

Roberts, acquired in the summer of 2017 from the Kitchener Rangers is one game away from his 250th OHL regular season game. He has collected 92 points (21 goals, 71 assists). Roberts, the oldest player on the team, was honoured to be given a letter this year. “Being able to lead, especially with all the young defencemen we have, and being able to teach some of these guys on the ice and teaching them how to be a pro, is exciting.”

Burke praised Roberts for his leadership qualities and the support he provides in the dressing room and on the ice. “Since the moment Elijah Roberts arrived here in a trade from Kitchener you could tell he was a natural leader. He is a team first player who genuinely cares about his teammates. He goes out of his way to make sure everyone on the team is included and that everyone knows what is expected of an IceDog on and off the Ice.” said Burke. “He has developed into a rock solid, complete defenceman, and a guy you want to go to battle with.”

Hunter’s work ethic, perseverance and positive mindset is what Burke hopes can be passed down to the younger players. “Over the course of his career here, he has played limited minutes and he’s been a healthy scratch but not once did he ever complain or feel sorry for himself. He worked tirelessly on the ice, in the gym and in the video room to become the rock solid, all situations player that he is today.” Burke continued. “Drew has a fantastic personality, his teammates gravitate to him . He will be a great mentor to our young D core.”

Hunter, a 12th round pick in the 2016 OHL Priority Selection, became a regular on the IceDogs blueline in 2016-17. In each season with the team, he’s played 51 games. In the 2018-19 season, he collected a personal best 26 points (5 goals, 21 assists) in regular season play. “It’s a great honour to be named an Alternate and have the coaches show this much confidence in me. I’m just ready to get going.” said Hunter.

Burke raved of Oliver Castleman’s compete and work ethic that has developed over the course of his time in Niagara. “He has quietly been a big part of this team for 4 years now. On the ice he competes and battles as hard as anyone but also has the speed and skill to be a scoring threat every night. He has a tremendous personality and is another guy who goes out of his way to make sure every guy on the team feels important, a great role model for our younger guys.”

Overage forward Oliver Castleman, a former 4th round selection in the 2016 OHL Priority Selection, enters his fourth season in Niagara. In 192 games played, he’s scored 51 goals, and collected 56 assists, for 107 points.”After playing under the captains and alternates I’ve played with, it’s a huge honour to looked upon as a leader.” said Castleman. The Ottawa native will be looked upon to provide mentorship to the younger forwards on the IceDogs front end. ‘I can’t wait to help the younger guys settle in, and help teach them what it takes to play to their full potential”.

The entire Niagara IceDogs organization would like to congratulate Elijah, Drew, Oliver, and Phil on this significant accomplishment, and look forward to the season ahead!