The off-season is a time for our players to relax after a long season, travel, and to prepare for the upcoming season. Summer training is crucial to being ready for training camp in August.

Alternate Captain, and LA Kings prospect, Akil Thomas put an interesting twist to his off-season training regimen and travelled to Kingston, Jamaica with Western Hockey League players Roman Brasran and Austin Herron. While there, Akil experienced a new culture, training style, and some down time to visit the island.

Upon flying into Jamaica, Akil had an excellent view of the Caribbean Sea from both the villa he was staying in, and the runway his plane landed on. As it turned out, he was staying at a villa, in Ochos Rios, owned by premier goaltending coach Eli Wilson. Wilson has coached several current and former NHL goaltenders, as well as CHL, USport and NCAA goalies. He also operates the prestigious Eli Wilson Goaltending School, based in Edmonton, Alberta and Abbotsford, British Columbia. Although Akil was there to relax, he was kept on a schedule to help his body prepare for next season, and recover from training.

“He [Wilson] is very strict so since we got our time to lounge and chill by the pool and ocean. He organized workouts for us with various trainers in Jamaica.” said Thomas. “We went to a near by school where we got trained by their track coach” 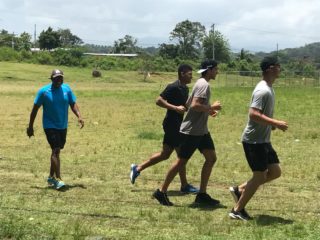 The track, though, was different than those he’s trained on in Canada. “The track was literally just a grass field, with a track made out of show implants in the grass”, Akil said. He even ran with wild goats in bushes. The heat in Jamaica is significantly stronger than that in Canada, which made training that much harder. “People don’t realize that like the way the sun beams down on you in some parts of the world is tough to adjust to. We had to bring a lot of water because the sun in Jamaica easily dehydrates you. So even things that we would do in Canada with ease might be tougher outside in Jamaica because of the humidity”. 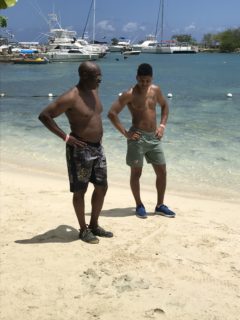 Akil also trained on the beach and in the water, with locals watching, unsure of who or what they were doing. “It was pretty cool because everyone on the beach were probably regulars, so they were looking at us like ‘who are these guys running down the beach?'”.

The trip wasn’t all business for Akil, though. After long days of training, he took in the local lifestyle and tried new types of food in the city. “At night, we would go to the town square, where everyone just has barbecues and are cooking meat and selling fruits and veggies. So we would go there and eat late at night, after dinner”.

After training in Jamaica, Akil headed to Los Angeles for Kings Development Camp at the end of June. Next up for Akil is to join Philip Tomasino at Hockey Canada’s National Junior Team Sport Chek Summer Development Camp.