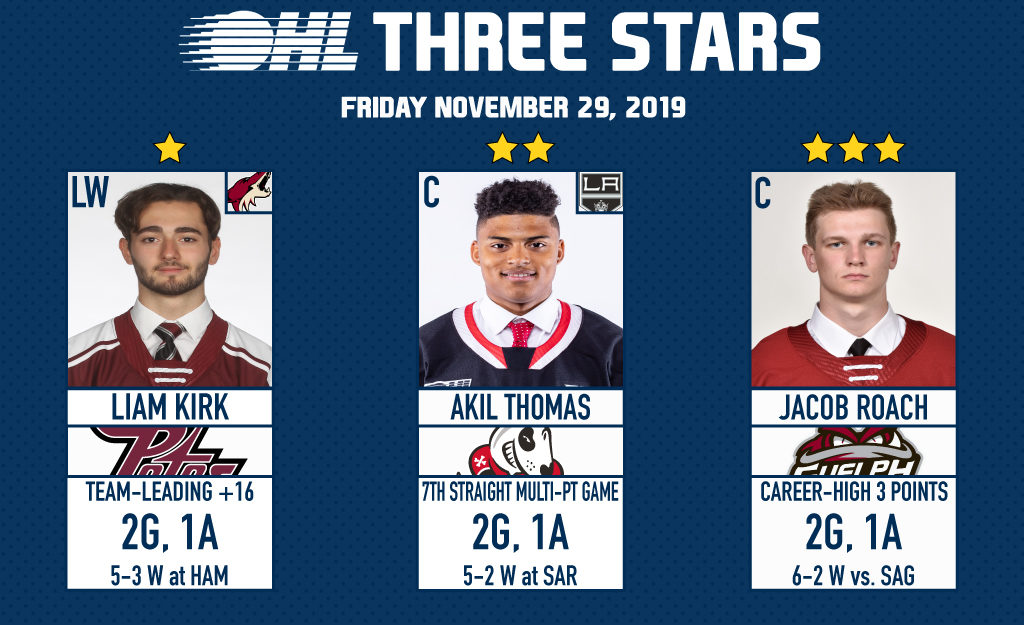 1ST STAR: LIAM KIRK (PETERBOROUGH PETES) – 2G, 1A
Arizona Coyotes prospect Liam Kirk registered two goals and one assist in the Petes’ 5-3 road win over the Hamilton Bulldogs. Kirk’s point total currently sits at 32 (14-18–32), tied with teammate and Winnipeg Jets prospect Declan Chisholm for second in Peterborough scoring, on pace to fly past his rookie season total of 47 points in 63 games played. Hailing from Maltby, England, Kirk was drafted eighth overall by the Petes in the 2018 CHL Import Draft, and was picked up by the Coyotes in the seventh round of the 2018 NHL Draft.
• HIGHLIGHTS

2ND STAR: AKIL THOMAS (NIAGARA ICEDOGS) – 2G, 1A
Fourth-year Niagara IceDog Akil Thomas had a three-point night in his team’s 5-2 victory in Sarnia, extending his multi-point run of consecutive games to seven. The 19-year-old centreman earned an assist on Niagara’s first goal of the night before picking up two goals of his own, surpassing now-Detroit Red Wings forward Brendan Perlini for the current title of fourth in all-time IceDog goal-scoring. Thomas, who was drafted by the L.A. Kings in the second round of the 2018 NHL Draft, leads all Niagara players with 41 points (13-28–41) and sits seventh on the OHL top scorers list.
• HIGHLIGHTS

3RD STAR: JACOB ROACH (GUELPH STORM) – 2G, 1A
First-year forward Jacob Roach registered his first OHL career three-point night, guiding his Guelph Storm to a 6-2 home win over the visiting Saginaw Spirit. The 5-foot-11 product of Brooklin, Ont. now has 10 points (5-5–10) through his first 23 games with the Storm. After being drafted by the Sudbury Wolves in the eighth round of the 2016 OHL Priority Selection, Roach committed to the Storm as a free agent a season later. He put up 93 points (29-64–93) over 47 games with the GOJHL’s St. Catharines Falcons in 2018-19.
• HIGHLIGHTS