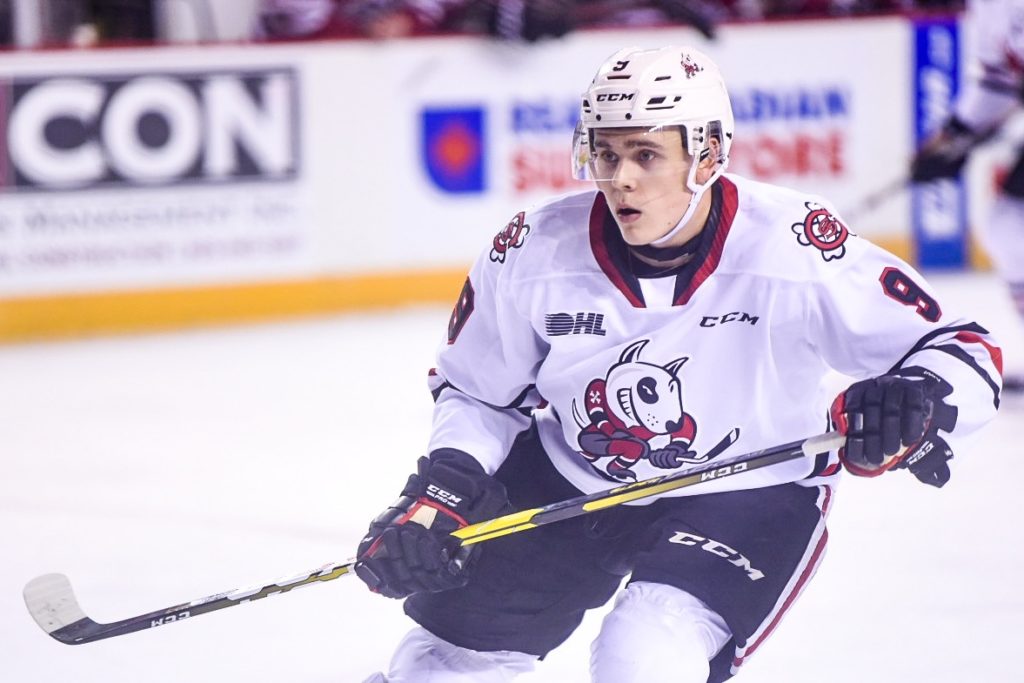 To conclude 3 back-to-back games, the IceDogs returned home to take on the Guelph Storm, reigning OHL Champions. Returning to the lineup for his first game back as an IceDog, was forward Ivan Lodnia. Lodnia was with Minnesota Wild’s affiliate team the Iowa Wild, to start the season.

A back and forth first period saw only one goal, which was scored by the Storm 3:14 into the game. Netminder Tucker Tynan looked as if he was in his element stopping 15 of 16 shots. He also got some help from his trusty goal post during an offensive push from Guelph mid-way through the period. The IceDogs lead the Storm in faceoff wins, 11 to 9, at the end of the period.

The Storm capitalized on their powerplay to extend their lead to 2-0 early in the second period. After that, the goals racked up as the IceDogs offense broke out. Kyen Sopa kicked off the IceDogs scoring when he scored short handed off the faceoff win from Phil Tomasino. The scoring continued 4:10 later as Ivan Lodnia made a statement scoring in his first game back with the IceDogs. Lodnia scored top glove with a wrister from the slot off a feed from Jackson Doherty. Mason Howard picked up the secondary assist. With the game tied at 2, the IceDogs powerplay went to work and with 58 seconds remaining on the odd man advantage. Sopa scored his second of the game. Akil had passed to Phil moving the puck from the right circle to the left and then it was all Sopa as he buried Phil’s shot to the far pad. This powerplay marker was followed by a Guelph goal to tie the game at three going into the second intermission.

The IceDogs came out hungry to start the third scoring 38 seconds in. Mason Howard passed to Sopa who dished off to Tomosino walking in from the blueline. Tomasino made no mistakes sending the puck to the back of the net. The IceDogs lead did not last long as the Storm capitalized mid-way through the third. The game remained tied at four sending the teams to overtime. The IceDogs had quality chances by numerous players on the IceDogs, including Sopa, Ivan, and Akil, which was only made possible by Tynan shutting the door in the backend. The game continued to a shootout where Tynan stopped all three Guelph shots and Lodnia put an exclamation mark on his return with the game winning shootout goal.

The IceDogs next game is on Friday, October 25th , and they will be facing off against the Hamilton Bulldogs. Remember to dress up in a costume, as it is our last home game before Halloween! Tickets are starting as low as $15/person and can be purchased online HERE, or in person at the following locations: