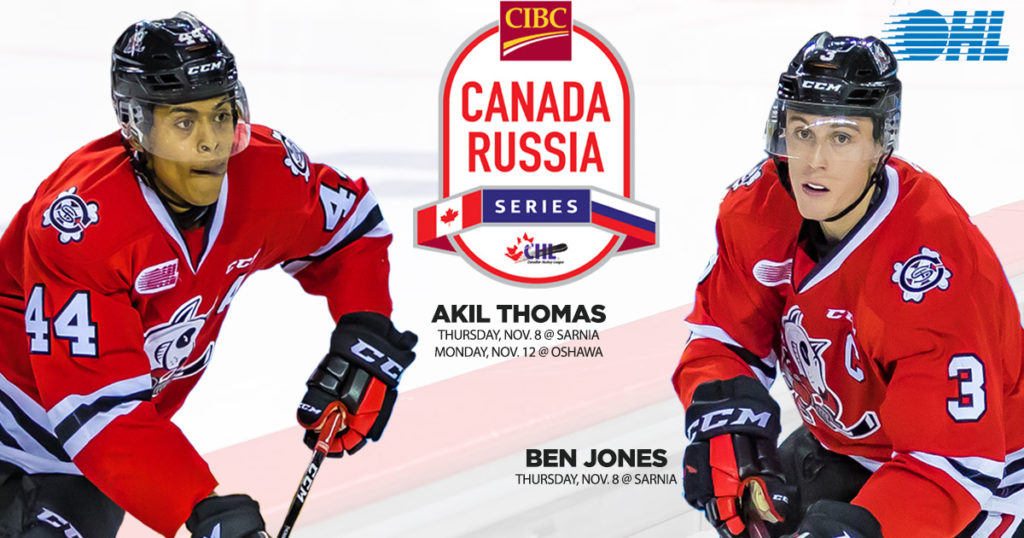 Toronto, ON – The Ontario Hockey League, in collaboration with the Canadian Hockey League and Hockey Canada, today announced the Team OHL rosters for the 2018 CIBC Canada Russia Series.

Team OHL will compete against the Russian National Junior Team in Game 3 of the six-game cross Canada series in Sarnia on Thursday November 8 and in Game 4 in Oshawa on Monday November 12.  The series will begin with two games in the Western Hockey League and will wrap up with two games played in the Quebec Major Junior Hockey League.

Niagara IceDogs Captain, Ben Jones, and Assistant Captain, Akil Thomas have been named to Team OHL for the series. Ben Jones will represent Team OHL on Thursday, November 8th in Sarnia, while Akil Thomas will dress in both games (November 8 in Sarnia and November 12 in Oshawa).

In 15 years of competition against the Russian National Junior Team, the OHL has a record of 24-5-1 in this series following a 5-2 loss in Owen Sound and a 4-2 victory in Sudbury last season.

*denotes players competing in both games

*denotes players competing in both games

The 2018 CIBC Canada Russia Series is supported by title sponsor CIBC, the Official Bank of the CHL, along with associate sponsors Kia Canada, Sherwin-Williams, Cooper Tires, and Kubota Canada.  All games will be broadcast nationally on Sportsnet and TVA Sports.

For event information including how to purchase tickets please visit http://chlcanadarussia.ca.