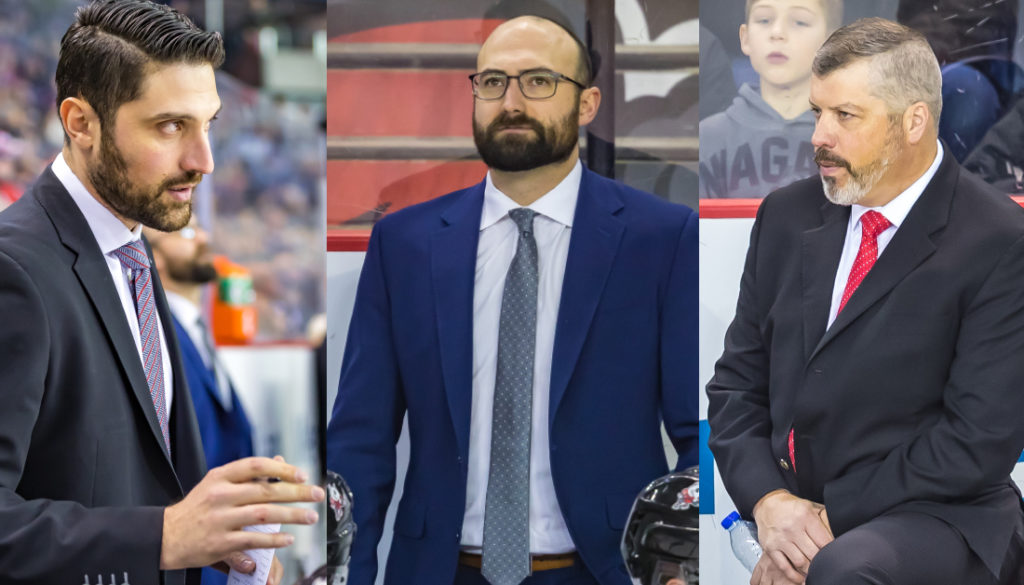 Ahead of the new year, Niagara IceDogs’ head coach Billy Burke (BB), associate coach Jody Hull (JH), and assistant coach Mark Mancari (MM) sat down to discuss some of the key factors that have led to their success so far this season.

The coaching staff reflected on the first half of the season and looked ahead to the Ontario Hockey League’s stretch drive, and a potential playoff berth.

BB: We’re being lead by our veterans. They do a tremendous job of being leaders; scoring and playing good team defence and it rubs off throughout the lineup. That was the big thing for me on having the success we’ve had, lately. It is a veteran league. It’s a star league. It’s a hard league to score in so you need elite talent, but talent can only take you so far. When you see the investment of the older guys and the way they take pride and care on the bench, especially late in games whether we’re up, tied, or down. It is always unbelievably positive. The veterans understand where we are at. We might not win a championship this year, but they’re  100 percent invested in this team. [They] take pride in trying to be good leaders and good guys and [are] leading the way for the next wave.

Q: You mentioned the next wave, with eleven first-year players on the roster, how do you strike a balance between winning immediately versus developing young players over the long term?

JH: I think the big thing is winning is contagious and so is losing. You create that right culture and that is led by our leadership group in Akil Thomas, Elijah Roberts, Ivan Lodnia, Phil Tomasino, and Oliver Castleman. When they do things right on a daily basis, it wears off on the younger guys. They want to continue that, as they move on in their hockey careers. I think that’s the culture that’s been set here for a number of years and we’re seeing that right now with our younger guys, who are starting to take over here.

Q: From a coaching standpoint how have you managed the acclimating of the team’s younger players onto the roster?

MM: There has been a lot of growth through the start of the year to now, finding the right line matches, getting used to each other and the systems, getting used to the type of ice time they’re receiving and positions they’re being put in. Everyone is buying in, and it is making the games and coaching a lot easier; playing in a structured system. Our younger guys have come such a long way. They understand the league a lot more [now], so everyone in the room knows the direction we want to go in, and I think, will be able to see how much they’ve learned and take it up a notch.

Q:  In particular, what has stood out the most to you about the growth of the team to date.

JH: The biggest thing is, it’s a process and we as coaches understood that and knew it wasn’t going to happen right out of the gate in game one. Lately, we’ve been having success, because of the guys consistency with their efforts in both games and practices, and that wears off over time. I think we’re starting to get rewarded for those efforts.

Q: Lastly, how do you feel about the team’s overall direction?

BB: It’s exciting the steps we’ve seen from September to now have been great. The league gets harder over Christmas, but we expect our guys to make another big jump. I’m thrilled to see what we’ve had so far and excited to see what’s to come. It is very rewarding to see all the hard work we’re doing behind the scenes, rubbing off on the players and they’re catching on. We feel if we’re hard-working and competing and playing together as a group, we like our chances against anybody on any night.

Clearly, the coaches and players – veterans and rookies alike – are pleased with their achievements in 2019, and excited for 2020. The entire organization, fans included, hope that the club will be in playoff contention, to continue building for the next quest for the J. Ross Robertson Cup begins. In terms of hard work, grit, and determination, this group of players is already in championship form.