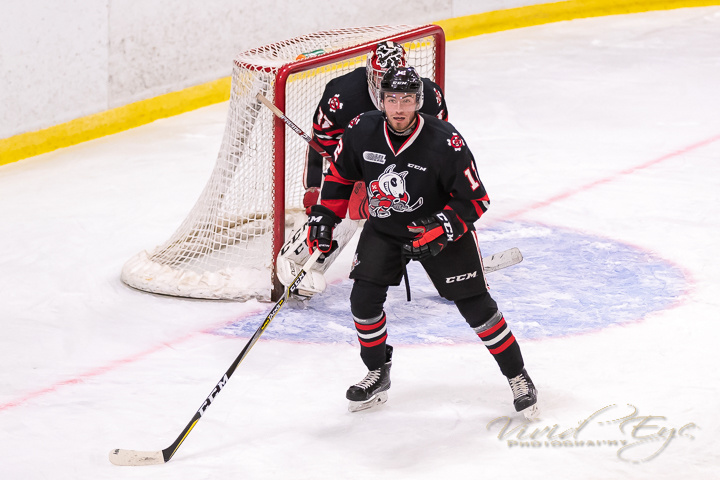 The IceDogs laced up their skates for the final home exhibition game, in Beamsville. The sold out crowd gave the IceDogs an extra boost of energy for their second game of a 3 in 3.

Rookie forward Anthony Agostinelli got the IceDogs on the board in the first 47 seconds of the game. Agostinelli tapped in a feed from overage forward Bradey Johnson in tight in front of the Petes netminder. Midway through the first period, Jonah De Simone notched his fourth of the pre-season on a 5-minute power play. De Simone’s marker was assisted by Lucas Theriault and Mason Howard. The Petes scored two goals in the back-half of the period to tie the game to finish the first period.

Early in the second period, the Petes took the 3-2 lead, but just over two minutes later, Dakota Betts let the puck fly from the blueline to tie the game! Midway through the frame, Jonah De Simone scored his second of the game to give the IceDogs the 4-3 lead off a feed from AJ Cook. Bradey Johnson was credited with the secondary assist. The Petes tied the game at four, capitalizing on a rebound off a beautiful toe save by Josh Rosenzweig.

Although the Petes re-gained the early lead in the third period, Kyen Sopa brought the crowd to the feet with just under 6 minutes to play in regulation with a snipe from the slot! Oliver Castleman’s shot his the boards and bounced right out to Sopa who tied the game at 5. Rookie goaltender Josh Rosenzweig picked up his first pre-season point with the secondary assist.

Regulation wasn’t enough in Beamsville, and the game headed to a shootout. In the fifth round, the Petes secured the win, although they only beat goaltender Rosenzweig twice. Anthony Agostinelli scored the IceDogs lone shootout goal.

The IceDogs have one exhibition game remaining, tomorrow night visiting the Petes.

The regular season kicks off this upcoming Thursday, September 19th, against the Sudbury Wolves at the Meridian Centre. Tickets are starting as low as $10/person and can be purchased online HERE, or in person at the following locations:

Discover Niagara at the height of harvest! Enjoy your choice of eight delectable food and wine pairings from thirty wineries, all for $45. Save $5 with code UNLEASHED at checkout.