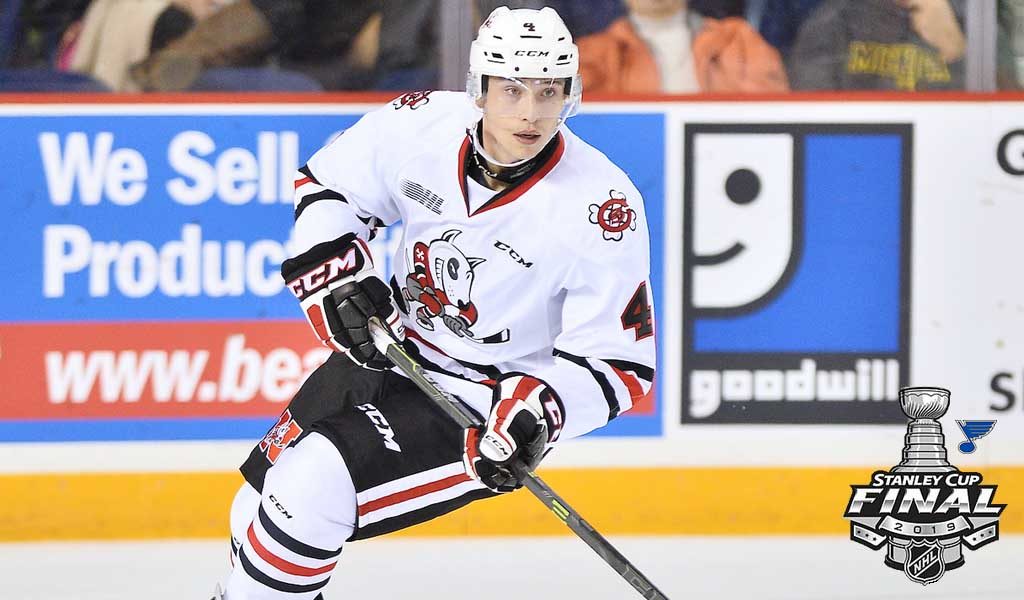 A former sixth round OHL draft pick whose swift development helped lead the Niagara IceDogs to an Eastern Conference title in 2016, Vince Dunn‘s ascent to NHL prominence has been equally rapid.

The 22-year-old from Lindsay, Ont. battled through a serious facial injury to make his Stanley Cup Final debut in Monday’s Game 4, drawing an assist in a 4-2 win over the Boston Bruins. Dunn was back in action on Thursday, logging 11:27 of ice as the Blues defeated the Bruins 2-1 to climb within one win of the historic franchise’s first-ever Stanley Cup title.

On Vince Dunn, who knows what Zdeno Chara is feeling and also could benefit greatly if Chara can’t play in Game 5: https://t.co/cU7utydsUk

The smooth-skating defender sustained the facial injury in Game 3 of the Western Conference Final when he was hit in the jaw by a shot from San Jose Sharks defenceman Brenden Dillon. The setback sidelined him for six games but Dunn fought through the pain to make his return at a time when the Blues needed a fresh set of legs.

“Any time you get a guy like that back in your lineup, it’s huge,” Blues forward Jaden Schwartz told NHL.com‘s Dan Rosen. “He’s good defensively, works hard defensively, but he’s very quick as far as in the D zone skating away from their checks and just making the right plays at the right time. He walks that blue line, gets his shots through really good. He’s an important piece for us.”

Facetime: Dunn shrugs off jaw injury (and adds a busted lip) in return to Blues https://t.co/GfiRKC6fXC via @stltoday

A true modern day defenceman, Dunn plays with an edge and has drawn praise from Blues head coach Craig Berube.

“He’s elusive,” Berube told Rosen. “Coming out of our end you feel like there’s times where the puck is going to get stopped up, but he’ll do something, make a move and a quick play with the puck that breaks the guys out and we’re going up the ice. Having that skating ability from the offensive side of things is very helpful.”

While some of the Blues’ big horses like fellow IceDogs alumnus Alex Pietrangelo and Colton Parayko shoulder a bulk of the minutes in St. Louis, Dunn’s presence is welcome on the blue line. He’s registered eight points (2-6–8) through 18 games in the 2019 playoffs.

Dunn had some brilliant moments in his OHL playoff career as well, becoming one of a handful of defencemen in league history to register four goals in a single playoff contest on Mar. 26, 2015 at Ottawa, a feat not equalled until this past spring when London blueliner Adam Boqvist pulled it off. A year later, Dunn was instrumental in Niagara’s run to the OHL Championship Series, recording five different multi-point efforts along the way.

“It’s amazing out there, Dunn told Jim Thomas of the St. Louis Post-Dispatch of his first Stanley Cup Final experience. “I’m still kind of shaking from it. It’s very intense. It’s very emotional for me. It’s something that I’ve always dreamed about and wanted to get myself in this position. To be here finally it’s a very special feeling. I’m very grateful.”

Dunn and the Blues look to close things out in Game 6 on Sunday night in St. Louis and bring the Gateway to the West its long-awaited Stanley Cup.