Draft Dogs | Lead Up to the NHL Draft with Ben Jones 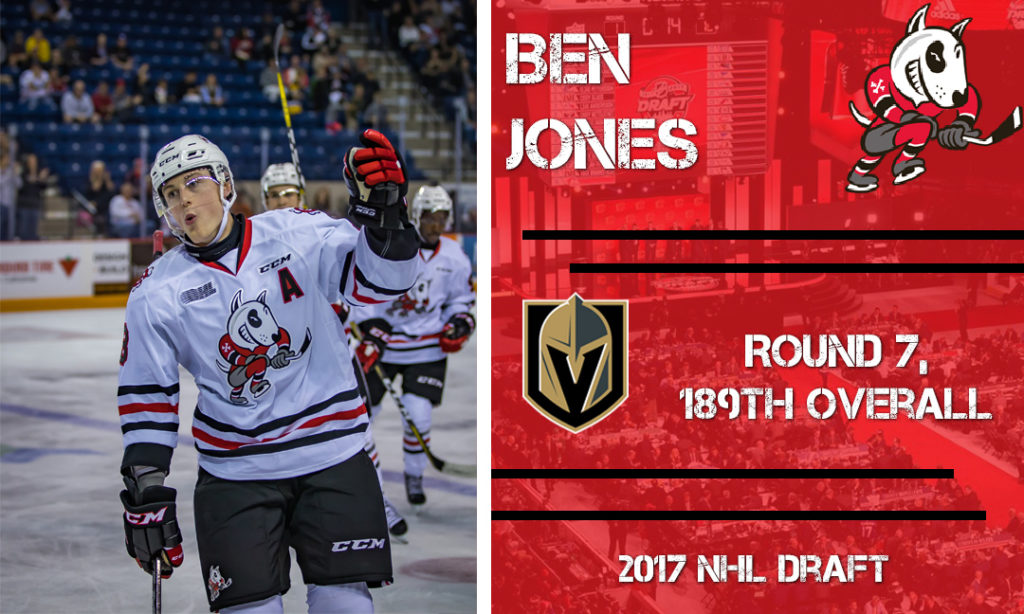 The 2018 NHL Draft is upcoming, on June 22nd. Each week, to get insights into their draft experiences, we will be catching up with players who have been drafted, while playing for the IceDogs.

This week, we caught up with, current alternate captain, forward Ben Jones.

The Waterloo, native, Jones, spent his minor midget season with the Toronto Marlboros. He posted 27 goals and 69 points over 74 games. His impressive season led to Niagara drafting him 7th overall in the 2015 OHL Priority Selection Draft.

Jones is coming off a career-best season. He posted 30 goals and 79 points, and helped lead the IceDogs to the second round of the playoffs. As a testament to his leadership capabilities, Ben was also named alternate captain prior to this season.

Last June, in Chicago, Ben was drafted in the 7th round of the 2017 NHL Draft by the Vegas Golden Knights – making him part of the first draft class in the franchise’s history.

Q: What was like it like going into your draft year, and all the excitement that goes along with it? Did it feel any different from previous seasons?

A: It was very exciting, but also very nerve-racking knowing that there will be NHL scouts at a lot of games and the room for error is very limited. The pressure was on to do all I could to perform well every game

Q: In the lead-up to the draft, there’s all the talk about who’s ranked where and who’s going to be picked in what position. What was that like for you?

A: Not being ranked at all going into the year was frustrating, but I knew that I had to turn some heads and prove some people wrong – which ended up helping me in the end. It forced me to work even harder than I had before, and I was more motivated than any other season. However, it was also very exciting to see some of my very close friends and teammates be ranked.

Q: Take us through draft day, what was that experience like for you?

A: The experience on draft day was one that I will never forget. It was a great atmosphere in Chicago and it was very exciting to see some teammates and friends get drafted throughout the day. Although it was a very exciting day, it was also a very nerve-racking one as well. Not knowing when I was going to be picked, or if I was going to be picked at all was very difficult to sit through.

Q: Your teammate Kirill Maksimov was drafted two rounds prior to you. Does he get some bragging rights now in the dressing room?

A: In a sense yes. However, Kirill is not the type of person to brag about where he was drafted or being drafted at all. He helps the players around him and shares his experiences of being to an NHL camp. We all know that being drafted is just the start of a long road ahead.

Q: Talk about that moment. When you heard what team it is, and being able to share that with your family when the news comes out.

A: That moment, being selected by Vegas, was pretty indescribable. It felt like all the hard work had finally paid off. However, it actually meant that all the hard work was just beginning! Although it’s quite a blur with the emotions and excitement that was going on, I remember sharing it with my family and close friends and I will definitely remember hearing my name called for the rest of my life.

Q: How did you approach this past season, after being drafted, now, that you’re part of an organization and the pressures of your draft year is over.

A: Having all the pressure of my draft year off my shoulders was definitely relieving. However, it did not mean that I could just mail it in and not have a good year. I knew that Vegas would be watching me throughout the year, and this season was almost even more important than the season prior. Being drafted is just the beginning step. The next step is earning a contract, and that is why I knew I had to have a big year.

Q: How does it feel to be a part of the first ever draft class in Vegas Golden Knights history?

A: It pretty astonishing to think that I am part of the first ever draft class in Vegas history, and not many others can say that. Only a very small group of players will ever be able to say that they were the first draftees to an expansion team

Q: Have you been watching the team at all over the course of the regular season and now the playoffs? What a story it’s been so far.

A: Throughout the season I didn’t watch Vegas as much as I had wanted to, however, now that our season is over, I have really taken a liking to watching them in the playoffs. It is amazing to see how they are doing and I don’t think anyone could have guessed that Vegas would be in the conference finals.

Q: What advice would you give to the IceDogs eligible for this year’s draft?

A: My advice to our players eligible for the draft this year would be to enjoy the day. It is an amazing experience. But, also, don’t get too held up on the draft. There are many players that aren’t drafted their 1st or 2nd time through the draft, and still have very long careers in the NHL.

Q: Is there an NHL player you try to model your game after or someone you’ve looked up to?

A: I think I play a similar style of game to Jonathon Toews, he is the captain for Chicago, which clearly shows his leadership abilities. He also plays a responsible, 200ft. game as a centreman while being strong on face-offs.

So, there you have it! A behind-the-scenes look at what it’s like to experience the NHL Draft, and be a part of history with the Vegas Golden Knights!

Jones is expected to be back with the IceDogs next season and will be looking to lead them to another successful season. Stay tuned for more draft profiles leading up to the NHL Draft on June 22nd!