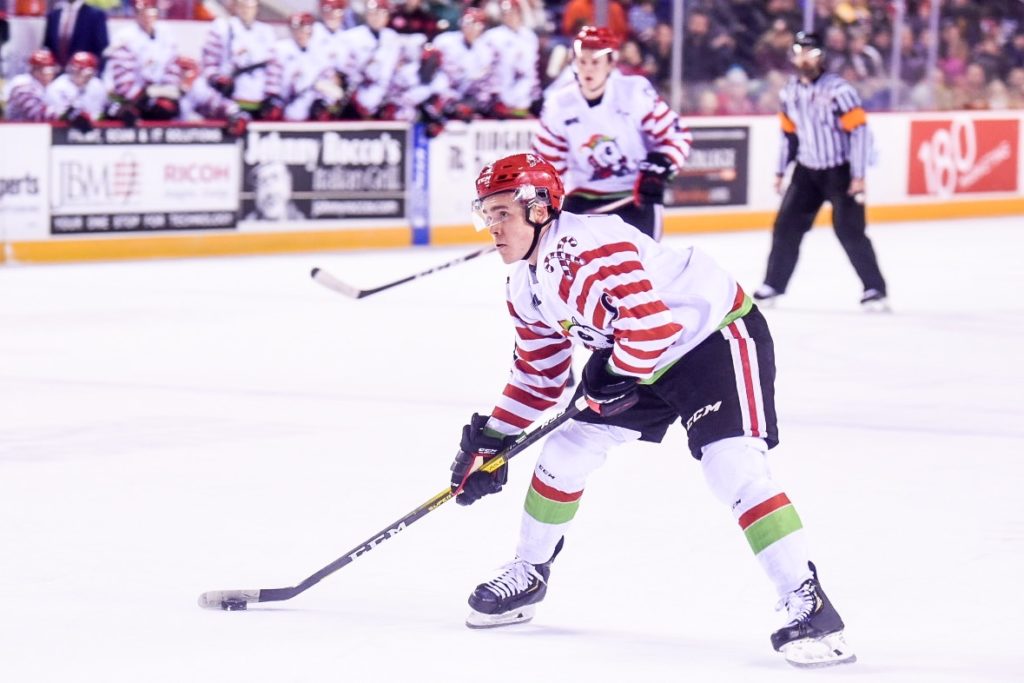 Tonight’s game was the annual Teddy Bear Toss and Ugly Christmas Sweater game! The IceDogs faced off against their Western Conference rival, the Sarnia Sting (12-15-0-0). The IceDogs (11-13-4-1) picked up two points in Sarnia at the end of November and looked to sweep the season series.

The IceDogs got momentum early killing off a penalty against Sarnia’s 3rd place power play. Then, it only took 3:23 into the game for it to rain teddies in the Meridian Centre. Elijah Roberts picked up his 100th OHL point as he passed the puck up the boards to Kyen Sopa in the IceDogs end. Sopa rushed up the boards fighting off a Sarnia defenseman and dished off to Ivan Lodnia who hits the open net.

The Sting answered back with one of their own, but it did not phase the ‘Dogs. Rookie defensemen Isaac Enright pressured a Sarnia forward on the offensive blueline and Akil Thomas was hustling back and found himself in the right spot to pick up the bobbled puck. The puck then moved from Akil, back to Enright, and then to Oliver Castleman in front to take the lead back with a score of 2-1.

Sarnia started the second period by tying the game up at 2. From then on, rookie goaltender Tucker Tynan was swallowing up and redirecting rebounds to squander Sarnia’s chances on net. Andrew Bruder got his 7th of the season to regain the IceDog’s lead with the single assist going to Roberts.

Pass shoot and score (This is a Miracle reference btw)#IceDogs | @bruder91 pic.twitter.com/G4PkibE5JN

The back and forth game continued with the Sting knotting the game back up at 3. Less than a minute later, Castleman taps in his second of the night off a beautiful passing play courtesy of Phil Tomasino and Sopa.

The Sting scored one more goal at the end of the period and one early in the third to take the lead 5-4. The game continued to have chances in both ends, and Tynan made a highlight reel save diving across his crease to keep the game within reach.

Lodnia scored his second of the night to tie the game up with 10:12 remaining in the game.

With 48 seconds remaining in the game the deadlock was broken on the powerplay as captain Thomas snuck into the slot and buried a feed from Tomasino. Thomas’ goal was the game winner is tonight’s rally between the two teams.

IceDogs take the win, 6-5. With these two points the IceDogs will move up to 5th in the OHL Eastern Conference.

There were over 4000 teddy bears collected during the toss this evening. Stay tuned for an official count later this week!

The bears from tonight’s game will be donated to Victim Services of Niagara and the proceeds from the jersey auction held post-game are going to Community Care of St. Catharines and Thorold, and United Way Niagara.

Next game, the IceDogs are hosting a toy drive where all of the toys will be donated to community care. If you bring a toy you will receive a $2.00 voucher for an IceDogs home game and a chance to win a trip to the Memorial Cup.

Your IceDogs next game is Thursday, December 12th against the London Knights. Tickets are starting as low as $15/person and can be purchased online HERE, or in person at the following locations: