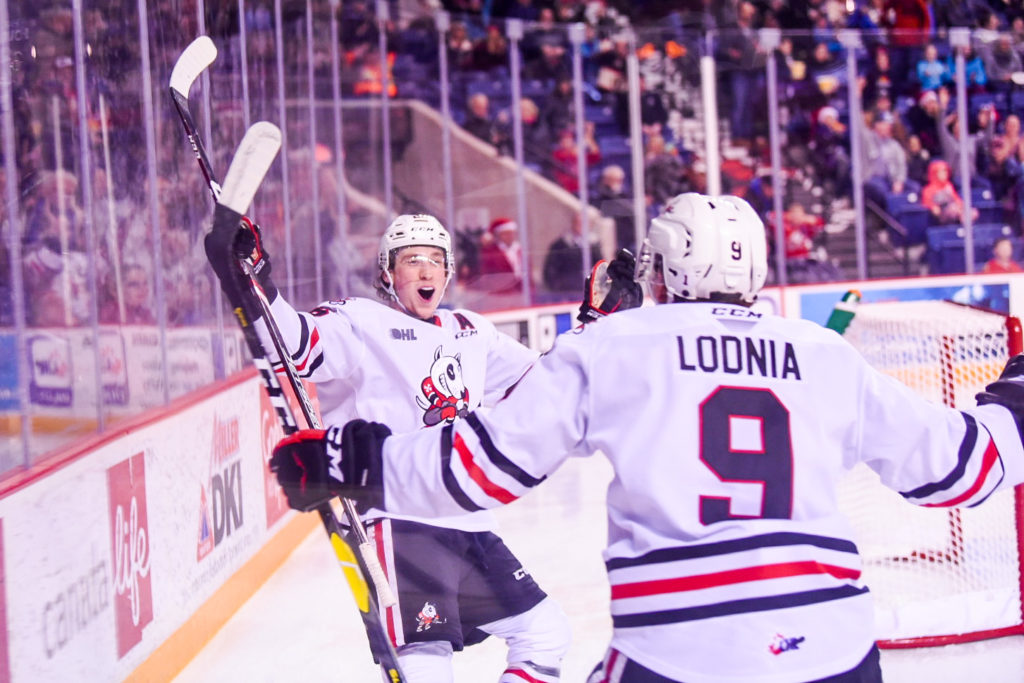 The IceDogs (12-13-4-1) faced off against the Kingston Frontenacs (9-18-2-2) for their last game before the Christmas holidays. A win would move the ‘Dogs into 5th in the Eastern Conference.

The IceDogs are back to playing the game they love, and it showed with an explosion of goals in the first period. Phil Tomasino started the scoring off 13 seconds in with assists going to Ivan Lodnia and Adrien Beraldo.

Jonah De Simone extended the lead with his fourth of the season – which was a laser from the slot.

The third IceDogs goal was courtesy of Ivan Lodnia 10:37 into the game.

With the score already 3-0, the Kingston Frontenacs had Ryan Dugas come in for relief. The second shot he faced was a shot from Dakota Betts that he took from the point; Castleman buried the rebound for his 12th on the season.

The goals continued with Anthony Agostinelli digging the puck off the boards and wiring a shot to score his first OHL goal.

The IceDogs gave up a goal on their power play making the score 5-1. With a five minute penalty kill to end the period, Mason Howard and Andrew Bruder showed their defensive grit by blocking numerous shots.

The second period began the same way as the first. Only 24 seconds in, Tomasino scored during 4 on 4 play.

Only 1 minute later; the line of Bruder, De Simone, and Snow was buzzing around the offensive zone. Snow eventually worked the puck up to Howard on the point who let off a shot that was tipped by Jonah into the Kingston net.

Any TIPS for Christmas baking? pic.twitter.com/GxMdnrYlj1

Agostinelli found his scoring touch this game as he scored his second of the game. The lone assist went to Ryan Campbell; which was his first OHL point.

The IceDogs killed off 6 minutes of penalties that period and went into the second intermission leading 8-1.

The IceDogs for the third time in tonight’s game got a goal in the first minute of the period. Castleman went five-hole to kick off the third period.

Kingston got two of their own to close the gap to 9-3. To finish off the evening Cameron Snow got his first OHL goal and celebrate with a second goal seconds later.

The final score was 11-3 for the Niagara IceDogs, with Christian Sbaraglia stopping 37 of 40 shots on net.

It is now Christmas time for the IceDogs! The ‘Dogs will not return to the ice until the 28th, and will not be back at the Meridian center until New Years Eve with puck drop scheduled for 6:00 p.m.