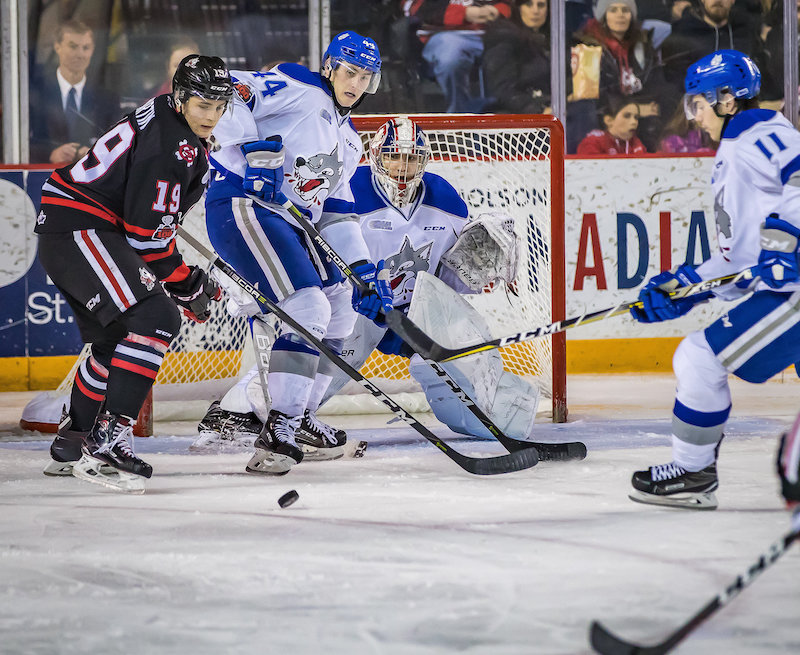 The Niagara IceDogs were on the road this afternoon to play the Wolves in Sudbury. Today’s game was the second time these two teams have played each other in 10 days. The ‘Dogs will be looking to beat the Wolves’ goalie, who made 48 saves the last time Niagara faced Sudbury.

Four minutes into the first period, Daniel Bukac pinched down into the offensive zone, reading the play from Sopa well. Bukac picked up the pass from Sopa and beat Luukkonen short side to take the 1-0 lead! Bukac’s first OHL goal was assisted by Kyen Sopa and Ivan Lodnia. The Wolves tied the game at 1, but shortly thereafter Philip Tomasino was fed by Oliver Castleman as they went in on a 2 on 1. Tomasino blew past the Wolves’ defenceman and beat the goaltender glove side to re-gain the lead! Colton Incze was credited with the secondary assist, the first of his OHL career. Then, during sustained pressure in the offensive zone, Oliver Castleman sneaked the puck between the sliding goaltender and the post to extend the lead to 2! Johnathon Schaefer and Ian Martin were credited with the assists on Castleman’s tally. The IceDogs held a 3-1 lead heading into the middle frame.

Early in the second period, Ivan Lodnia picked up a loose puck in front of the Sudbury goal and slid it into the open side of the net! Lodnia’s fourth of the season was also assisted by rookie defenceman Lleyton Moore. In the final minute of the period, Oliver Castleman scored his second of the game off wrister from the faceoff circle that beat Luukkonen blocker side. Mason Howard and Matthew Philip were credited with the assists on the 5-1 marker.

Midway through the third period, Sudbury pressed hard, especially when given just their second powerplay of the game, but goaltender Colton Incze made a series of incredible saves to hold on to the 5-1 score.

The IceDogs return home with a possible 5 of 6 points on the weekend!

The ‘Dogs are back on home ice Thursday October 18th against the Ottawa 67s, our first match-up against them this season. Take advantage of our $10 Fall Thursday deal. For every Thursday night game in October, November and December, we are making hockey more easily accessible with $10 tickets in our Value section (sections 108-111)!

We also play the next night, the 19th, against the Windsor Spitfires. This will be our first specialty-jersey game of the season! The ‘Dogs will be wearing Superhero jerseys, to show our support and appreciation for the heroes in our community that work with Family and Child Services Niagara.