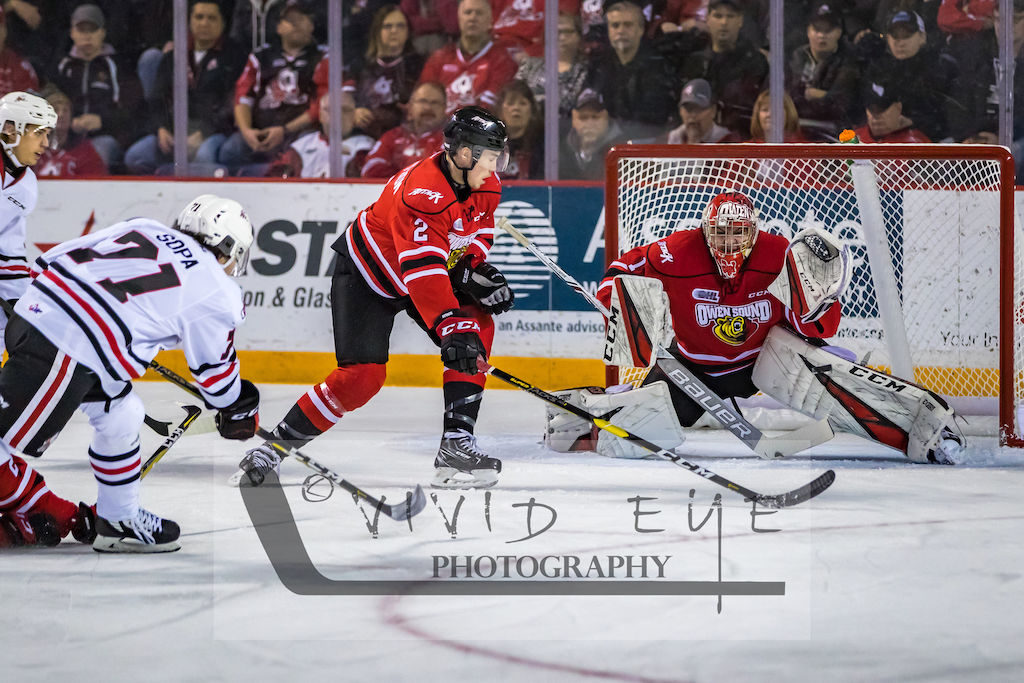 Following last night’s exciting, and record setting 5-0 win over the Peterborough Petes, the IceDogs were back in action Sunday afternoon. This time, they visited the Owen Sound Attack for the only time this season.

Despite having played last night, both teams came out flying, looking for the opening tally. Kirill Maksimov got the ‘Dogs on the board first midway through the opening frame by firing a wrist shot passed the Attack goaltender from the hashmarks. Although the ‘Dogs took a penalty in the final minute of the first, they escaped the period with a 1-0 lead!

Early in the second, Niagara killed off the penalty continuing from the opening frame. Two minutes later, Ben Jones was left alone in front of the Attack goaltender. Akil Thomas’ shot from the face off circle was tipped into the net by Jones to give the ‘Dogs a 2-goal lead. Ben Jones scored his 2nd of the period as he went in one on one into the Owen Sound end against a defender but then he was left alone as the trailing player, Maksimov stole all the attention from the Attack defence. Jones beat the goaltender five-hole to give Niagara the 3-0 lead. Over two minutes alter, Jack Studnicka did what he did best in the slot, out waiting the Attack defence and goaltending to score into a nearly open net. In the final minutes of the period, Matt Brassard joined the 50-point club this season with a blast from the blue line of his own to give the ‘Dogs a 5-0 lead heading into the final period of regulation.

Akil Thomas added another power play goal for the ‘Dogs in the third period! Thomas showed off his pro-like finish with his 31st of the year. The Attack left another ‘Dog alone in front of the goal with just over 5 minutes to play in the game. Matt Philip tapped in a shot from Elijah Roberts to score his 11th of the season! The ‘Dogs weren’t done there! Drew Hunter led the rush into the offensive zone. A weak pass from Hunter got tied up in the goaltenders feet and slid into the net to give Niagara an 8-0 lead. With a minute and a half to go, Jack Studnicka roofed a backhander to score his 6th goal of the weekend and 2nd of the game.

The IceDogs dominated the Attack in a 9-0 win that set yet another record. Stephen Dhillon, who has shut-out opponents in 6 periods of hockey solidified win #31, the most in Niagara IceDogs history! This record was previously set by Mark Visentin who won 30 games in back to back seasons in 2010-2011 and 2011-2012!

Jason Robertson also tied his earlier point-streak of 18 games with 2 assists in this afternoon’s win! He is now 1 point away from from 300 all time points, and he has surpassed Ottawa’s leading scorer Tye Felhaber for 99 points on the season.

The ‘Dogs are back in action at home next Sunday afternoon to the Sarnia Sting, following 2 more games on the road in North Bay, and Barrie.

Standing room and single tickets ONLY remain for Saturday’s game, and can be purchased online HERE, or in person at the following locations: