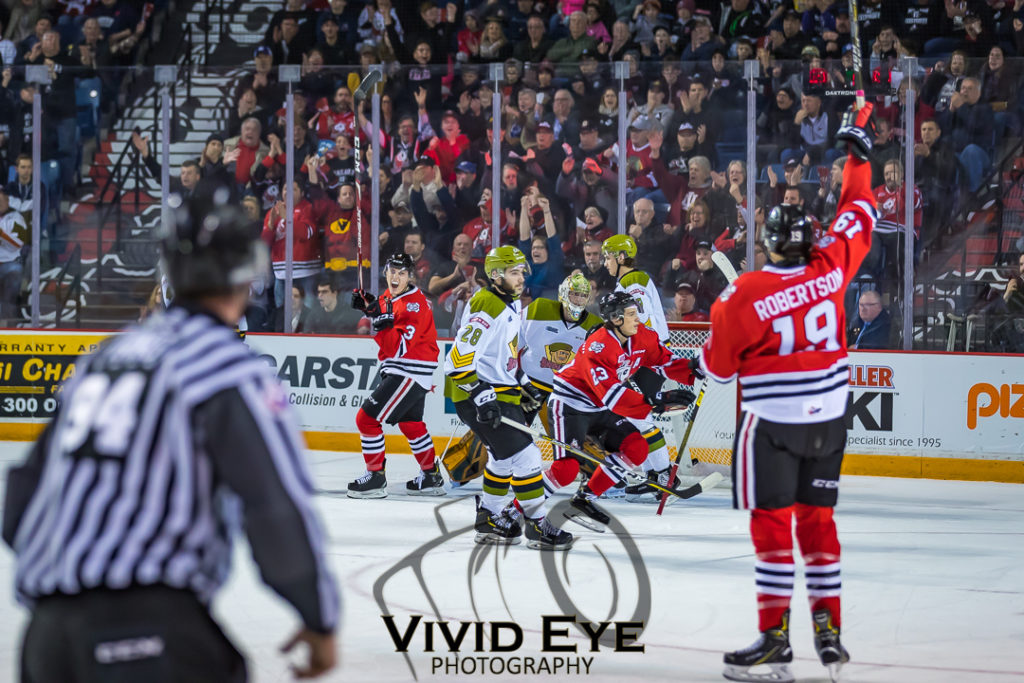 Niagara returned home for Game 5 Friday night following an emotional 5-3 win in North Bay Thursday night.  The IceDogs were welcomed back to the Meridian Centre in front of a loud and excited sold out crowd for a Sportsnet broadcast.

The physical play started early in this one, with Andrew Bruder setting the tone early against Luke Burghardt. Shortly thereafter, the game went down to 4 on 4, but the Battalion took another penalty to give the IceDogs a 4 on 3 powerplay. Matt Brassard held the line in the offensive zone, waiting for the ‘Dogs to get set up in the offensive zone. He found Jack Studnicka alone at the hashmarks who made the cross-ice pass to Jason Robertson. Robertson finally got the monkey off his back, capitalizing after having missed some opportunities earlier in the series. Robertson’s 2nd of the post-season gave the ‘Dogs a 1-0 lead the held going into the second period.

Nearing the midway of the second period, the IceDogs were on 2 consecutive power plays. The first got some looks, but couldn’t capitalize. On the second, however, the IceDogs doubled their lead! Akil Thomas was left alone in front of the net and stickhandled his way around the Battalion netminder to extend the Niagara lead to 2! The IceDogs continued to throw as many pucks on net to the North Bay goalie as they could, dominating the shot clock 43-16 by the end of the period.

Jacob Paquette opened the scoring in the third period pinching into the slot to extend our lead to three! Then, 5 minutes later, on a power play, with a delayed penalty coming, Jack Studnicka stuck with a bouncing puck and lifted it over the goaltender to give the ‘Dogs the 4-0 lead! Despite the Battalion pressing to get on the board, Stephen Dhillon stood tall to post a 27 save shutout, his third blanking of the series!

The IceDogs are moving on to Round 2 with a 4-0 win over the North Bay Battalion!

Tickets to round 2, home games 1 and 2 are on sale NOW! We don’t know who we’re playing, yet, but it’s sure to be another exciting period! More details about the Eastern Conference Semi-Final can be found here.

Tickets can be purchased online HERE!