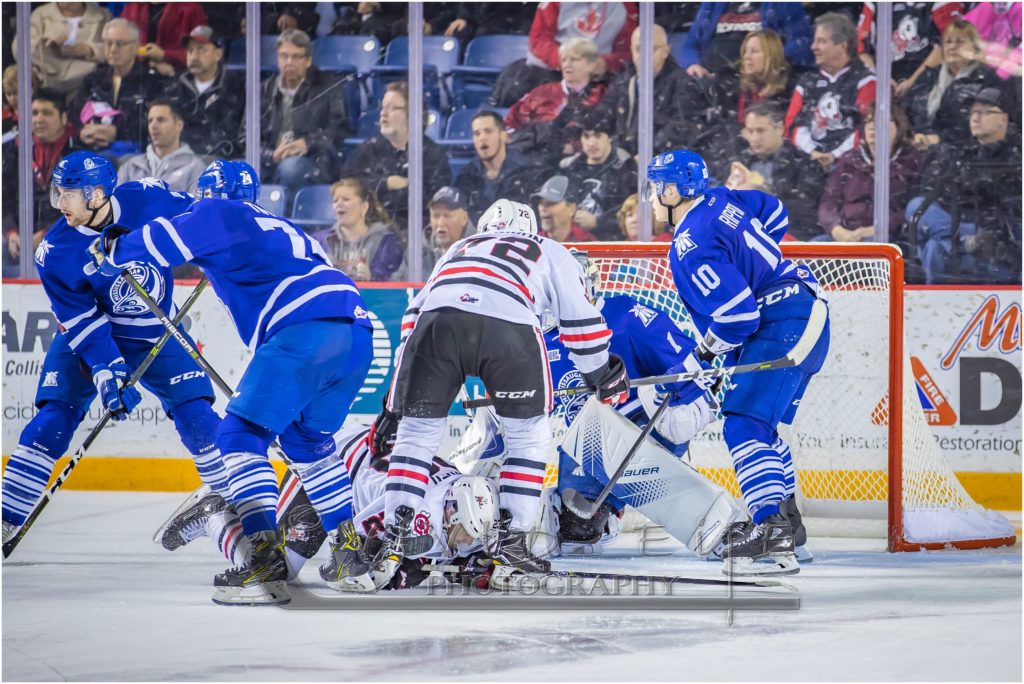 The Niagara IceDogs opened the 2018-19 regular season this afternoon with a match-up against the Steelheads, in Mississauga. Despite being a road game, there appeared to be quite a bit of red in the crowd that made the trip down the QEW/403 to watch the new-look ‘Dogs with the newly returned NHL draft picks.

The first period got off to an even start for both teams. The start proved to be a feeling out period for both teams. Ivan Lodnia broke the scoreless start nearing the end of the first period, to score his first goal as an IceDog, and our first of the 2018-19 season! Akil Thomas was credited with the lone assist on Lodnia’s marker. Just under a minute later, Elijah Roberts scored his first of the season with a blast from the blueline. Akil Thomas was credited with the only assist on Roberts’s goal as well. The Steelheads broke the shutout with less than a minute remaining in the period.

A minute and a half into the second period, Ivan Lodnia scored his second of the game to re-gain the 2-goal game. Rookie defenceman Lleyton Moore picked up his first regular season assist, while Akil Thomas collected his third assist in just over 20 minutes. Kirill Maksimov got in on the fun with a powerplay goal. Ben Jones and Ivan Lodnia were credited with the assists on Maksi’s goal. Maksimov scored again later in the 2nd period to redeem a penalty he took a few minutes earlier. Johnathon Schaefer and Matthew Philip were credited with the assists on Maksimov’s second of the game. Bradey Johnson went streaking into the offensive zone with Kyen Sopa and Oliver Castleman and beat the Steelheads’ goaltender from between the faceoff dots. The Steelheads scored three consecutive goals, two of which coming on the powerplay. With less than three minutes remaining in the second period, Ben Jones scored a goal of his own in tight on the powerplay. Mississauga responded with another goal in the dying minutes of the period to come within 2 goals to make it 7-5.

Early in the third period, Mississauga cut the IceDogs’ lead to 1. The remainder of the third period had fans holding their breath as both teams went back and forth exchanging chances. It was Akil Thomas, picking up his 5th point of the game, who solidified the win for the ‘Dogs!

The IceDogs took this one 8-6, setting a record for the most goals scored at Paramount Fine Foods Centre by 2, previously set at 12 on November 2nd, 2007.