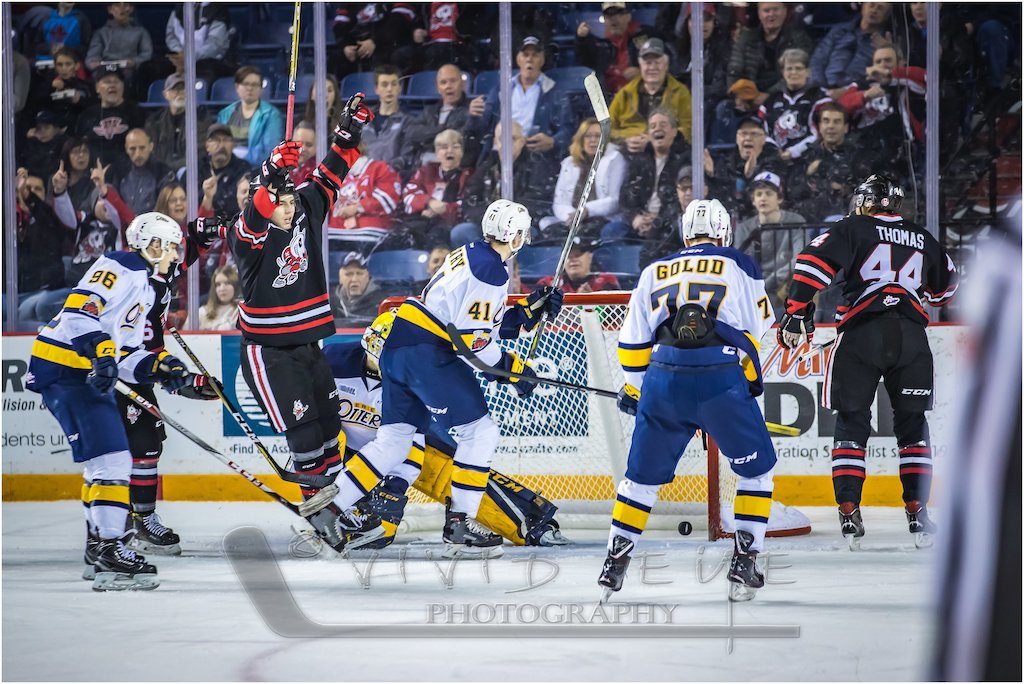 The Niagara IceDogs were on the road Saturday night to visit the Erie Otters for the second time this season. The last time the ‘Dogs were in Erie, a late third period comeback fell just short. They were looking to even up the season series, having come off a 6-3 defeat at home on Thursday night.

The IceDogs and Otters got off to a fast paced start tonight. Drew Hunter got the IceDogs on the board first with a wrist shot that beat the Otters’ netminder high glove side. Hunter’s second of the season was assisted by Captain Jones and Elijah Roberts.

Midway through the second period, Bradey Johnson pounced on a rebound in front of the Otters’ net and reached around the sprawling goaltender to double the IceDogs lead! Andrew Bruder and Oliver Castleman were credited with the assists on Bradey’s sixth of the season. Shortly thereafter, on a penalty kill, Stephen Dhillon made two incredible stops on the Otters as they pressed to break the goose egg. The IceDogs entered the third period leading 2-0.

Phil Tomasino extended the lead to three just over three minutes into the third period. Phil beat the Otter’s goalie short-side to give the ‘Dogs a 3-0 lead. Former Otter Lodnia and Sopa picked up the assists. The Otters scored to break the shutout for Dhillon, but Phil Tomasino scored while falling to re-gain the 3-goal lead! Matthew Philip and Drew Hunter got the assists on Phil’s 6th of the season. The Otters came back to make it a 1-goal game, but Captain Jones pulled through and scored his 4th goal in 2 games with an empty net goal to make it 5-3. Tomasino got his third point of the night with the assist on Jones’ goal. Matthew Philip iced the game with another empty net goal.

The IceDogs took this one by a score of 6-3. The ‘Dogs are back in action tomorrow night in Oshawa!

After visiting Erie and Oshawa this weekend, the ‘Dogs come back to town on Friday November 23rd against the Barrie Colts. That game will be presented by Special Olympics Ontario, celebrating inclusion through the power of sport.