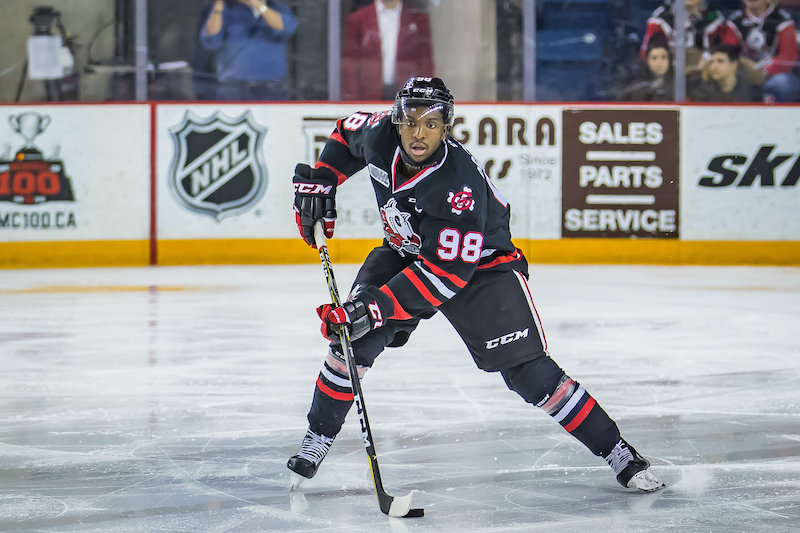 The Niagara IceDogs hit the road for their first match-up of the weekend, against the Spirit, in Saginaw. After defeating the Peterborough Petes 3-0 at home on Wednesday, the IceDogs were looking to keep their foot on the gas peddle and pick up right where they left off.

After scoring his first OHL goal on Wednesday, that ended up being the game-winning-goal, Jonah De Simone had the scoring touch as he netted his 2nd in as many games! De Simone’s game-opening goal was assisted by fellow rookie, Mason Howard, who went to work to tie up the Spirit player who was trying to enter the Niagara zone. Howard got De Simone the puck to give us a lead. Four minutes later, Akil Thomas and his linemates, Ivan Lodnia and Kyen Sopa, went streaking into the offensive zone on a 3 on 1. Thomas held on the puck and beat the Spirit goaltender low glove side to double our lead! Lodnia and Bukac were credited with the assists on Thomas’ 7th goal of the season. The 2-0 lead held going into the first intermission.

The Spirit scored two goals early in the second period to tie the game up at 2.

The game was tied heading into the third period, where Stephen Dhillon continued to shine. Making many incredible saves, Stevie came up especially big mid-way through the period absolutely robbing a Spirit player point blank.

60 minutes wasn’t enough for these two teams tonight. After an exciting three periods, we got some free hockey in Saginaw. Despite some good chances, this game went to a shootout. Akil Thomas opened the shootout with a goal, and Stephen Dhillon helped his teammates out by making two saves. Bradey Johnson iced the win with a goal in the 3rd round.

The IceDogs are heading into tomorrow afternoons’ game in Flint with a 3-2 win under their belt in Saginaw!

Take advantage of our $10 Fall Thursday deal. For every Thursday night game in October, November and December, we are making hockey more easily accessible with $10 tickets in our Value section (sections 108-111)!