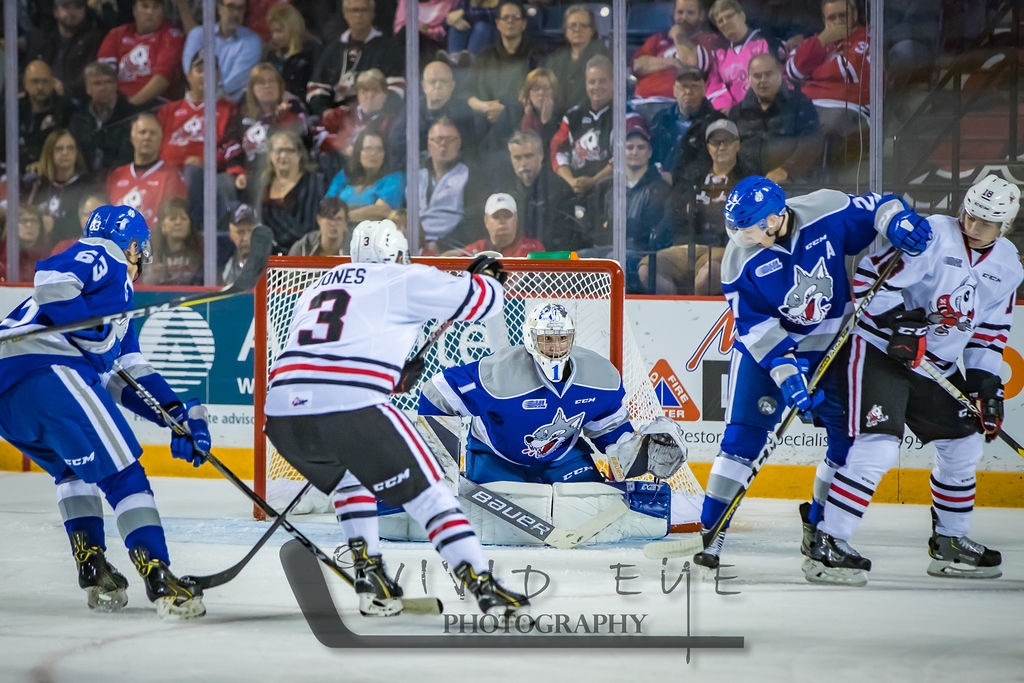 In the second game of a busy week for the Niagara IceDogs, they fell 5-4 against the Sudbury Wolves.

The first period saw the Wolves and the ‘Dogs exchange some goals. Philip Tomasino notched the first of the game for the ‘Dogs! Johnathon Schaefer skated behind the net and passed from the goal line to Tomasino, whose shot went through the slot and scored! A few minutes later, a Wolf scored shorthanded to even it up at 1. The ‘Dogs didn’t let that one go unanswered though, as they got back in the lead just over 30 seconds later. Akil Thomas cross the blueline and skated through the point to pass to Jason Robertson. Robertson, at the top of the slot, skated through the slot with some sweet back-and-forth stickhandling moves to score his team-leading 41st of the season! The secondary assist was credited to Matt Brassard. Sudbury scored seven minutes later to end the period tied up at 2 goals each.

Despite the IceDogs outshooting the Wolves 15-6 in the second period, Sudbury scored three goals to make it 5-2.

The ‘Dogs scored the only goals of the final frame! Thomas, from the back of the net, sent a pass to Drew Hunter at the point. Hunter made his own shot towards the net which bounced off. Thomas picked the puck back up to make it 5-3! In the last couple minutes of the game, after pulling goalie Stephen Dhillon for the extra attacker, Captain Ben Jones scored to bring us within one. Tomasino skated along the edge of the boards, passing to Brassard, who was between the points. Brassard sent a shot to Jonesy, who scored from right in front of the net! Unfortunately, the ‘Dogs fell short going into tomorrow’s game against Peterborough, with tonight’s 5-4 loss to the Wolves.

With his goal tonight, Robertson extended his point streak to 14 games.

The ‘Dogs face a heavy schedule this week! After tomorrow’s Family Day game in Peterborough, they return to home on Thursday February 21st against the Kitchener Rangers. A second match-up against Peterborough happens on Saturday February 23rd, this time at home.

Tickets for Thursday and Saturday’s games can be purchased online HERE, or in person at the following locations: