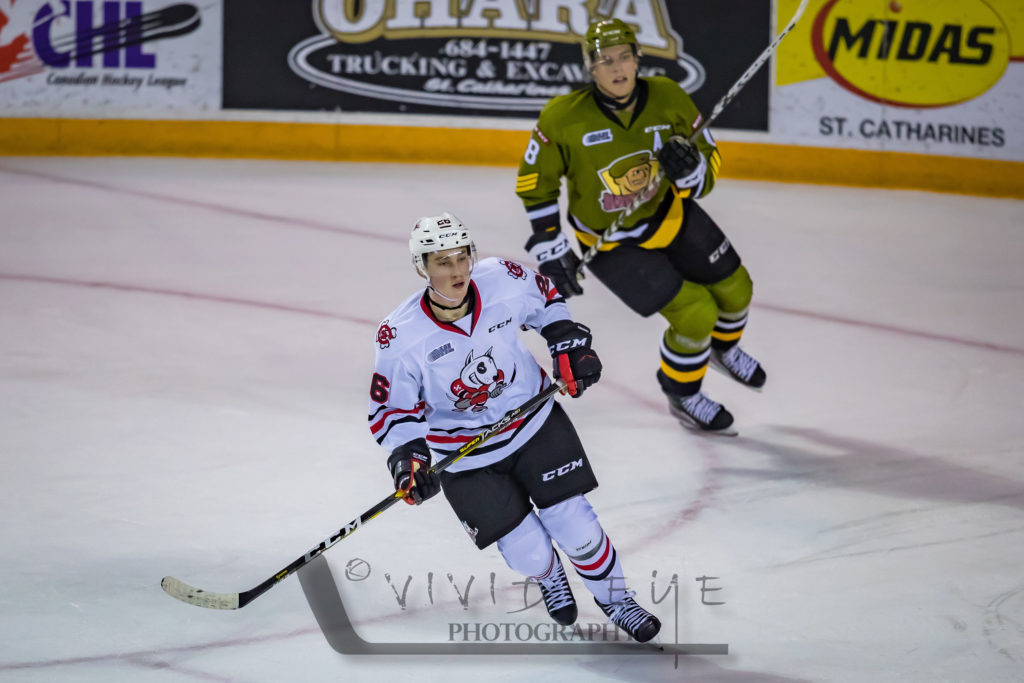 The Niagara IceDogs were back in action tonight in North Bay to close out this weekends’ home and home against the Battalion. After last nights’ 4-3 OT loss to the Battalion, the IceDogs are looking forward to a bounce back game to continue leading the Central Division. Rookie goaltender Christian Sbaraglia made his debut between the pipes.

Just over a minute into the game, Daniel Bukac got the IceDogs on the board with a blast! Captain Ben Jones and Bradey Johnson were credited with the assists on Bukac’s second of the season. Keeping pace from last nights’ game, North Bay came back to score two consecutive goals. The Battalion’s 2-1 lead was short-lived. Shortly after taking the lead, North Bay was sprung on a shorthanded breakaway, but Sbaraglia made a great save to maintain the score. On a 5 on 3 powerplay, Drew Hunter made no mistake with a wrist shot from the face-off circle. Hunter scored his first goal of the season in just his second game of the year. Oliver Castleman and Billy Constantinou were credited with the assists. The 2-2 score held going into the second period.

Early in the middle frame, Philip Tomasino scored, but the goal was over-turned due to an off-side call. Nearing the second half of the period,  North Bay capitalized twice to bring a 4-2 lead into the third period.

Ben Jones cut the Battalion lead to one, making it 4-3, with a wrist-shot into the top corner of the Battalion goal. Jones was fed the puck by Elijah Roberts, and found an opening for the puck. The IceDogs continued to press the Battalion defence to tie the game up at 4, but they weren’t able to get the last goal. The Battalion took this one 4-3.

After completing their home and home this weekend against the North Bay Battalion, the ‘Dogs are back in town on Thursday November 15th, facing the Hamilton Bulldogs.