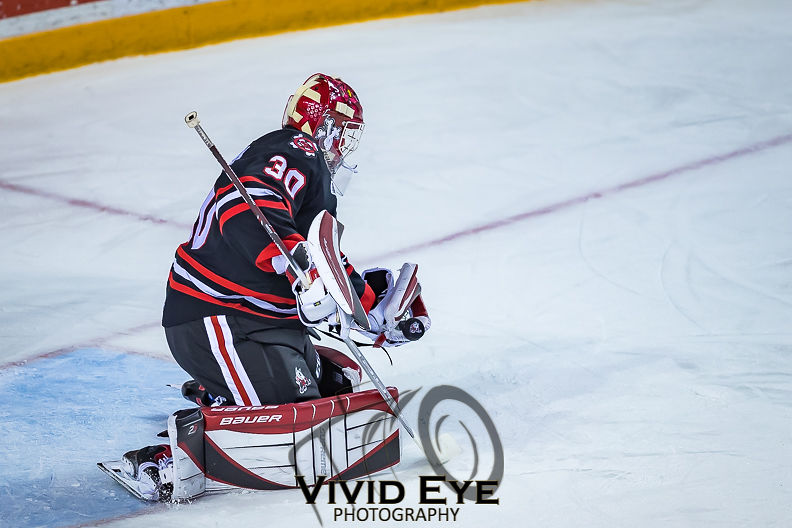 The ‘Dogs were back in action this afternoon in Sudbury follow last night’s exciting third period near comeback in Sault Ste. Marie.

The Wolves captured the early lead in the first period, but the ‘Dogs power play came through to tie the game up at one – showing why they are among the best in the league. Off a face off, Jason Robertson made a great play to keep the puck in the offensive zone. Skating down the boards, Robertson found Jack Studnicka open in the slot who made a short pass to Ben Jones. Jones, seeing he had attracted the attention of Ukko-Pekka Luukkonen, passed the puck through the crease to Akil Thomas, who beat Luukkonen as he sprawled to reach the other side of the net. Thomas’ 27th goal of the season evened the score heading into the 2nd period.

The Wolves add a goal just as one of their power plays expired a minute into the period. The IceDogs peppered Luukkonen with strong stops (12 in that period), but could beat him for an equalizer.

The Wolves added to their lead, but Captain Ben Jones pulled the ‘Dogs within one with under 10 minutes to play in the game. Jones’ powerplay tally was his 32nd of the season. With his assist on Jones’ powerplay marker, Jason Robertson extended his point streak to 12 games.

The IceDogs appeared to have beaten Luukkonen in the dying seconds during a surge in the Wolves’ zone, but it was deemed to not be a goal after review. The ‘Dogs dropped this one 3-2.

The IceDogs are back on the road next Saturday in Erie.

The ‘Dogs have one more away game against the Erie Otters (Feb. 16) before returning home on February 17th against Sudbury.

Dedicated towards mental health in youth, the game is presented by the Canadian Mental Health Association, Niagara Branch, and Teachers Life. There will be a post-game family skate, presented by Tim Hortons, offering free hot chocolate! Helmets and skates must be checked at ice-level before the game. Children under 14 must wear a helmet.

Tickets for next Sunday’s game can be purchased online HERE, or in person at the following locations: