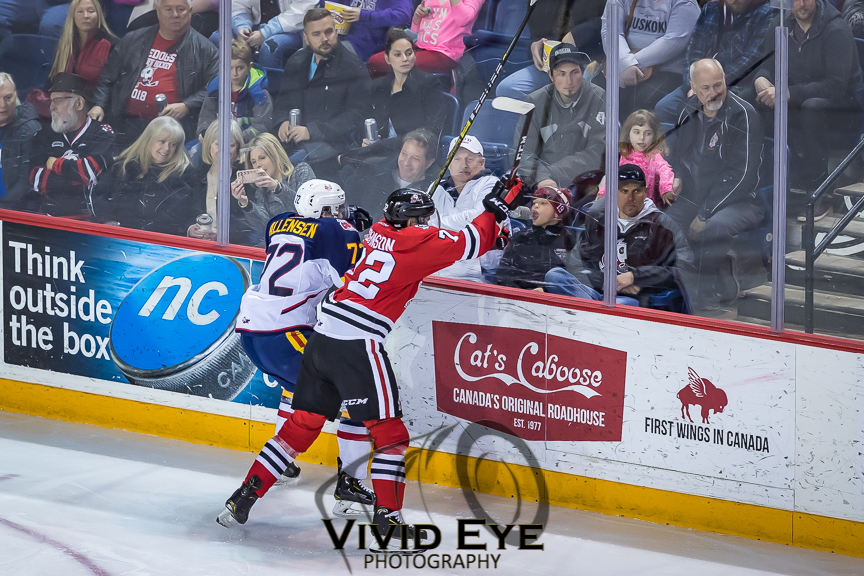 The IceDogs continued their last weekend of regular season play tonight in Barrie, to face the Colts for the 3rd time in two weeks. Coming into tonight’s game, the ‘Dogs had won one of their previous two against Barrie this month. Second-year forward Andrew Bruder made his return to the lineup. Bruder hadn’t played a game since being injured in Sudbury on January 13th. Akil Thomas entered this game after having an exciting day. It was announced earlier this evening that Thomas signed his Entry Level Contract with the LA Kings!

The ‘Dogs got off to a quick start in Barrie, scoring under two minutes into the game. Daniel Bukac got the offence started with a blast from the blueline that beat the Colts goaltender clean. Defenceman Drew Hunter picked up the primary assist, while Oliver Castleman, who left Thursday’s game for pre-cautionary reasons was credited with the secondary assist. The Colts evened the score shortly thereafter. The ‘Dogs continued to press for the go-ahead goal, outscoring the Colts 21-6 in the opening 20. In the dying minute of the period, Ivan Lodnia scored a one-timer from the face-off dot, off a cross ice feed from Jack Studnicka, to give Niagara the 2-1 lead heading into the first intermission.

The Colts came back early in the 2nd period to take the 3-2 lead, but that didn’t last long. Jason Robertson scored his 46th goal of the season to tie the game up at 3! Robertson scored a wrist shot from the slot off assists from Jack Studnicka and Ivan Lodnia. The ‘Dogs power play started to get hot as the period progressed. The ‘Dogs scored 2 power play goals from Jack Studnicka and Jason Robertson. With assists on the 2nd period goals Ben Jones and Akil Thomas reached the 100-point mark for the first time in their careers, making this the first time the Niagara IceDogs have had 3 100-point scorers in club history!

Heading into the third period, Jason Robertson had already collected 4 points in his 2nd consecutive game (2 goals, 2 assists). The Colts brought themselves within one on a powerplay 3 minutes into the third period, but Jack Studnicka scored his second of the game, and 36th of the season 40 seconds later! Ivan Lodnia was credited with the primary assist, while Elijah Roberts picked up his first point of the night on the 6-4 tally! Philip Tomasino added a goal of his own with under 8 minutes to play to extend the Niagara lead to 3-goals. With the lone assist on Tomasino’s goal, Jack Studnicka finished the night with 5 points!

The IceDogs added another win to the column and another 2 points to the season total, with a 7-4 win over the Colts.

The next time the IceDogs see fans at home is during the first round of the playoffs! On Thursday March 21st and Saturday March 23rd. Stay tuned for further details as to who the ‘Dogs will be facing in the Eastern Conference Quarter-final.

Tickets for both home games can be purchased online HERE, or in person at the following locations: