GAME RECAP | IceDogs pick up a point in 6-5 OT loss to Colts. 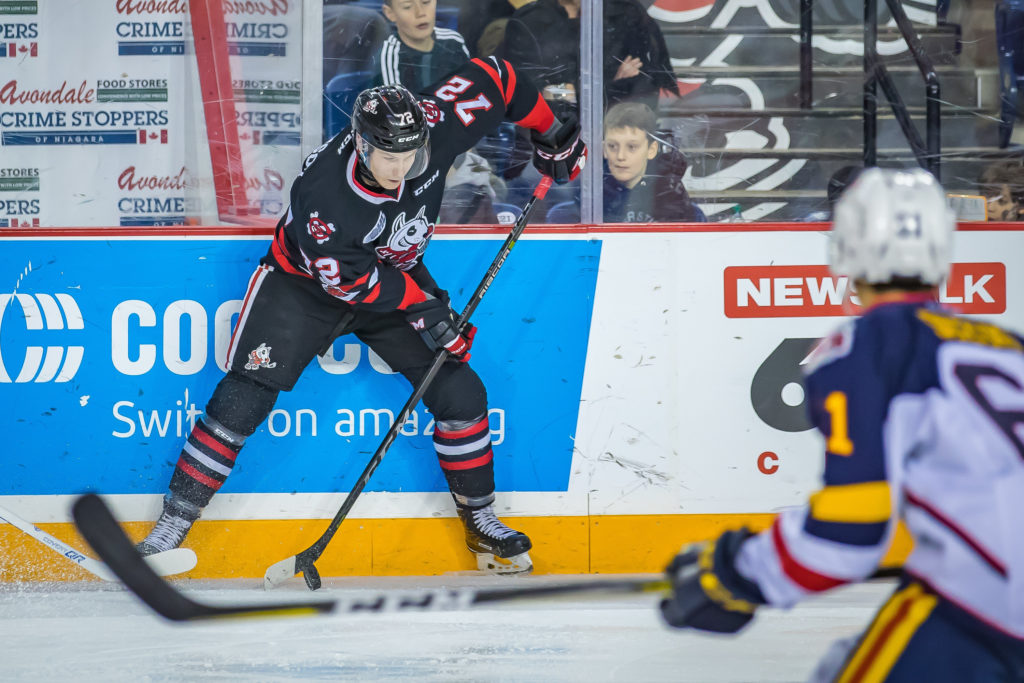 The Niagara IceDogs were on the road this evening to play the Colts in Barrie. Tonight’s game was the second in three nights the IceDogs played against the Colts. Niagara won the first meeting between these two teams 7-2 on Thursday, Oct. 11th.

The ‘Dogs seemingly picked up right where they left off Thursday night. Four minutes into the first period, Ben Jones picked off an errant pass up the middle in the Barrie zone but couldn’t get the shot off. Jones went after the puck along the boards, got it free and found Billy Constantinou, who shot the puck just under the Colts’ netminder’s glove to give us the 1-0 lead. Matthew Philip was credited with the secondary assist. Barrie responded with two goals of their own to take the 2-1 lead.

Early in the second period, Ian Martin’s initial shot on goal was stopped by the Colts’ goalie, but he found his own rebound to score the equalizer! Ian’s first goal of the season was unassisted. The Colts scored two quick goals late in the period, but it was Kyen Sopa who brought the ‘Dogs within one. With 11 seconds to go in the middle period, Sopa scored his 5th of the season to extend his point-streak to 4 games! Akil Thomas picked up the assist on Sopa’s tally. Heading into the final frame, the ‘Dogs were down 4-3.

Two minutes into the third period, Mason Howard releases a blast from the blueline to tie the game up at 4! Howard’s first of his OHL career was assisted by Billy Constantinou and Oliver Castleman. Barrie responded quickly to re-gain the lead. With just over two minutes remaining in the third period, Kirill Maksimov did what he does best and scored to tie us back up at 5! Maksi’s 9th of the season was assisted by Akil Thomas and Lleyton Moore.

60 minutes wasn’t enough for these two teams, as we headed to overtime. The Colts scored midway through the overtime period to take this one 6-5.

The ‘Dogs are heading to Sudbury for a match-up against the Wolves with a big point under their collar.

The ‘Dogs are back on home ice Thursday October 18th against the Ottawa 67s, our first match-up against them this season. Take advantage of our $10 Fall Thursday deal. For every Thursday night game in October, November and December, we are making hockey more easily accessible with $10 tickets in our Value section (sections 108-111)!

We also play the next night, the 19th, against the Windsor Spitfires. This will be our first specialty-jersey game of the season! The ‘Dogs will be wearing Superhero jerseys, to show our support and appreciation for the heroes in our community that work with Family and Child Services Niagara.