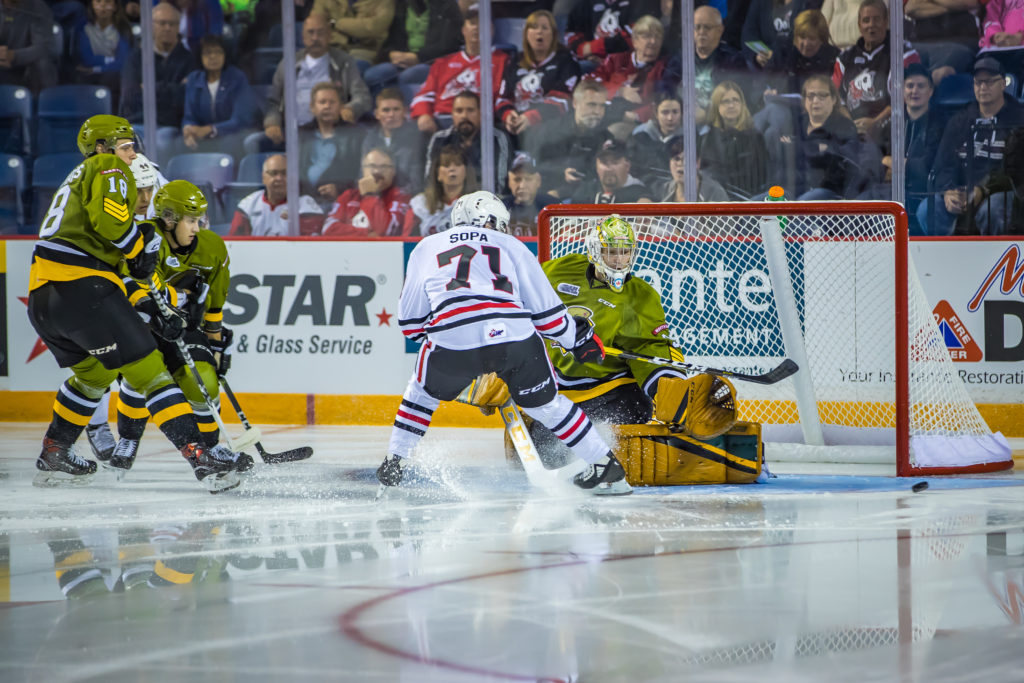 The Niagara IceDogs lost in OT with a score of 4-3 against the North Bay Battalion in our annual Military Appreciation Night. Defenceman Drew Hunter played for the first time this season in the first of a home and home against North Bay.

North Bay scored first to gain the lead in the first period. The teams exchanged some back and forth action, with a fantastic sliding save by Liam Ham to stymie the Battalions.

The second period was packed with nonstop action! Phil Tomasino scored the ‘Dogs first of the game to tie it up. His through the slot shot was assisted by Johnny Schaefer and Bradey Johnson. North Bay tied it up soon after, but then got a penalty for holding. On that powerplay, Matt Philip scored a backhander to even it up. Assisting his goal were Tomasino and Billy Constantinou. The Battalion’s next goal was answered by Bradey Johnson pouncing on a loose puck in front of their netminder. Philip and Ben Jones provided the assists for Johnson’s goal. The period ended with a 3-3 score.

The third period saw some great chances by both teams, but ended up fruitless and regulation time ended with a 3-3 tie.

Towards the end of the overtime period, North Bay scored to win the game 4-3. This leaves the season series tied at 1-1.

The ‘Dogs remain first in the division.

After completing their home and home this weekend against the North Bay Battalion, the ‘Dogs are back in town on Thursday November 15th, facing the Hamilton Bulldogs.