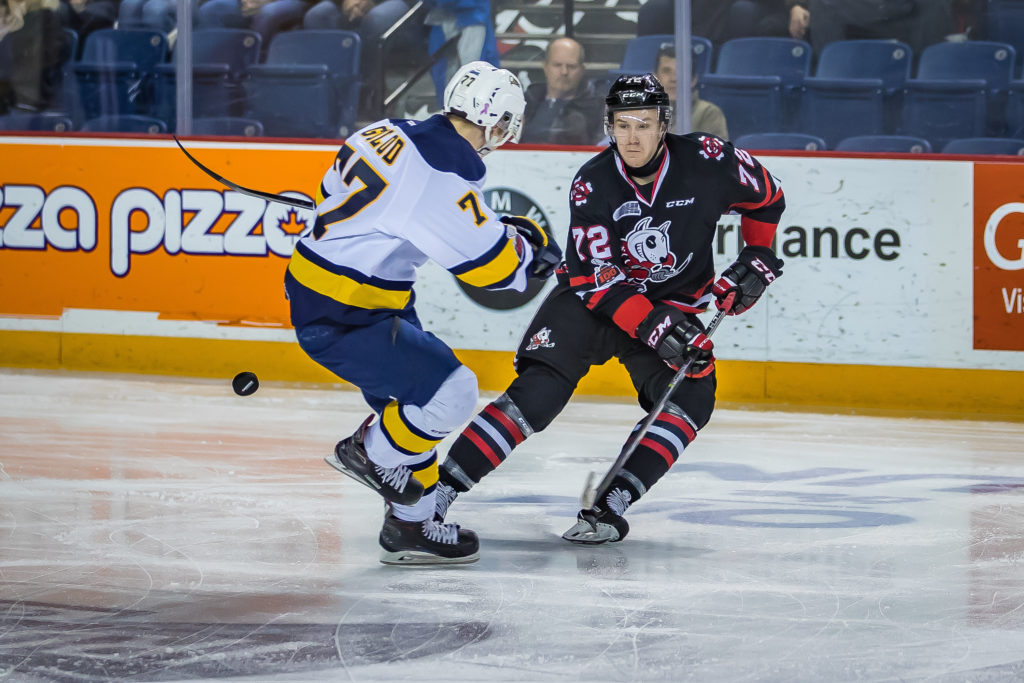 The Niagara IceDogs were in Erie tonight to close out their 3-game road trip, and begin a quick 3 in 3 week ahead of this upcoming rare weekend without games. Tonight’s game marked the first time the IceDogs faced the Otters this season, including the first game for Ivan Lodnia against his former team. Last season, the IceDogs captured 11 of 12 points, with the sole loss coming in overtime against the Otters.

The Otters scored three early goals in the 1st period to carry a 3-0 lead into the first intermission. The second period was stronger for the IceDogs, making more effective plays in front of Colton Incze and getting better offensive opportunities in the Otters’ zone. They put more shots on net, but they couldn’t beat the Erie goalie. The IceDogs continued to push hard and were finally rewarded! Akil Thomas broke the Otters’ shutout with his 4th of the season. Then, Matthew Philip made it a two-goal game, with his 4th of the season. Things got interesting when Colton Incze was pulled for the extra attacker. Niagara drew its first penalty of the game. Kirill Maksimov scored his league leading fifth powerplay goal of the season to cut the Otters’ lead to one. In the final minute of the game, the ‘Dogs did all they could to score the equalizer but just couldn’t get this one done.

The ‘Dogs are back in action at home tomorrow, Thursday, October 18th, as the Ottawa 67s come to town. Take advantage of our $10 Fall Thursday deal! For every Thursday night game in October, November and December, we are making hockey more easily accessible with $10 tickets in our Value section (sections 108-111)!

Mark your calendars! We are hosting our first ever Superhero night on October 19th as the Windsor Spitfires come to town! All jerseys will be auctioned live post-game in Section 105. All proceeds from the jersey auctions will be donated to Family and Child Services (FACS) Niagara, in support of the FACS Foundation. Don’t forget to match the ‘Dogs; wear your favourite Superhero apparel!