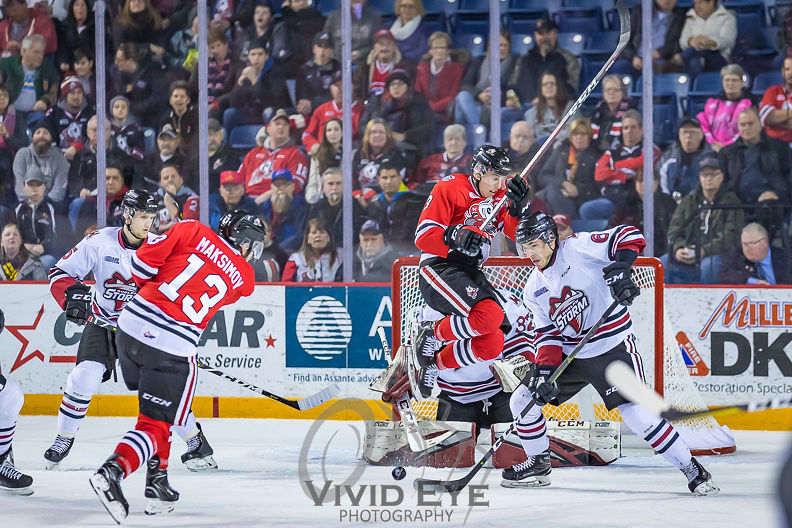 The IceDogs escaped snowy Niagara for a Sunday matinee in Guelph to close out their season series against the Storm with a 4-3 win in Guelph.

The ‘Dogs played a great road period, getting on the scoresheet early in the first period, thanks to Akil Thomas. The LA Kings draft pick finished last night’s game with 2 goals, and he added his 3rd in two games to get the IceDogs the 1-0 lead! Matthew Philip was credited with the lone assist on Thomas’ 22nd goal of the season. Then, with less than three minutes remaining in the period, Kirill Maksimov doubled our lead with a blast from the face off circle on a power play! Maksimov’s 29th of the season was also the IceDogs’ 200th goal of the season! Elijah Roberts and Phil Tomasino picked up the assists on Maxi’s 199th career OHL point! Heading into the 2nd period, the IceDogs were leading 2-0.

The Storm cut the IceDogs lead to 1 off a shorthanded goal midway through the first period. Later in the second period, Jason Robertson made up for the shorthanded goal allowed by scoring a power play goal of his own! Matt Brassard found Robertson, from the blueline, for the one-timer to beat the Guelph net-minder. Akil Thomas was credited with the secondary assist. Under a minute later, Thomas scored his second goal of the game to extend the Niagara lead to three!

The third period started with a 4-1 lead for Niagara, and with the IceDogs on the penalty kill. The Storm capitalized on their man advantage to cut the IceDogs lead to 2. Nearing the midway of the final frame, the Storm made it a 1-goal game. Stephen Dhillon led the charge making 49 saves as the ‘Dogs put out the Storm in Guelph, by a score of 4-3, as the snow ceased falling in Niagara!

The ‘Dogs are back on home ice Thursday, January 24th! The game against Erie Otters will be a Goodwill Donation game. Drop off a bag of donations at any entrance of the Meridian Centre before the game and receive a voucher for a $2 ticket to the game against Mississauga on February 7th!

Tickets remain for Thursday’s game can be purchased online HERE, or in person at the following locations: