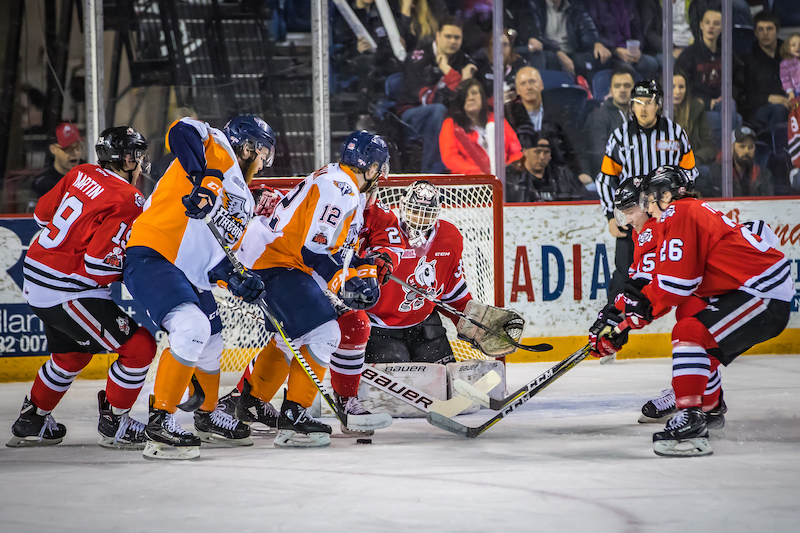 The Niagara IceDogs were back on the road this afternoon in Flint, following last night’s exciting 3-2 SO win. The ‘Dogs are facing a Firebirds team playing in their first weekend under newly appointed Head Coach Eric Wellwood. The Firebirds also picked up their first point of the season last night in an overtime loss to Sarnia.

The ‘Dogs got the game off to a hot start in Flint, with Billy Constantinou scoring a powerplay goal just 7 minutes into the game. Billy’s blast from the face off circle that beat the Firebirds’ netminder short side was assisted by Liam Ham and Bradey Johnson, last nights’ hero. The defence continued their contributions offensively as Lleyton Moore scored his first OHL regular season goal! Constantinou picked up the lone assist on Moore’s blast from the slot. After killing a full 2:17 5 on 3, Ivan Lodnia extended the IceDogs’ lead to the 3 scoring just as Elijah Roberts stepped out of the box. Akil Thomas was credited with the assist. Then, Akil got himself on the scoresheet again, scoring a shorthanded goal off an offside error by the Firebirds. Thomas went streaking into the zone all alone after he outskated the Flint defenders. The Firebirds got on the board nearing the end of the first period, but the IceDogs carried a 4-1 lead into the first intermission.

Nearing the midway point of the second period, Kirill Maksimov went streaking into the zone, and showed great patience deep in the offensive zone, out waiting the Flint goaltender and slid the puck to Ben Jones, who tapped the puck in the net for his 5th of the season, and our fifth of the game. The IceDogs continued to dominate the second period, but were not able to beat the goaltender.

Kyen Sopa scored two third period goals to seal the deal for the IceDogs to win this game 7-1, making it our fourth consecutive win!

The IceDogs are coming home with a 2-0 record with this afternoons’ road win, and sole possession of 2nd in the Eastern Conference.

Take advantage of our $10 Fall Thursday deal. For every Thursday night game in October, November and December, we are making hockey more easily accessible with $10 tickets in our Value section (sections 108-111)!