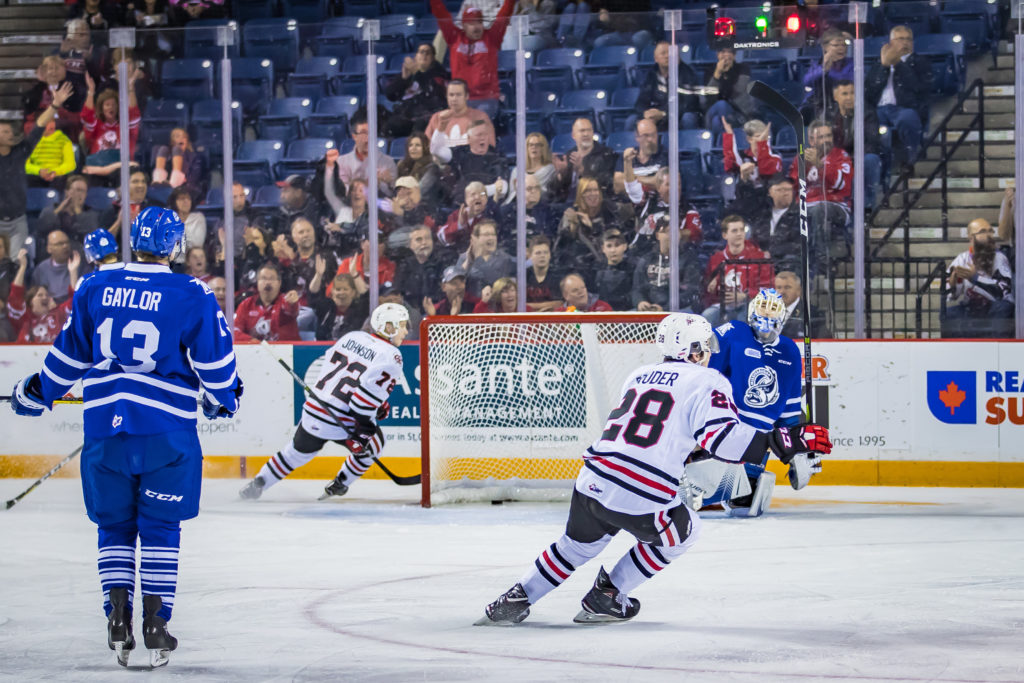 The Niagara IceDogs won the first of their home and home against the Mississauga Steelheads tonight with a score of 3-1.

Mississauga scored to kick off the game in the first period. That didn’t hold back the ‘Dogs for long, with Ivan Lodnia going in 2-on-0 on a shorthanded breakaway. He got hooked and couldn’t complete the goal.

The second period was packed with action in front of the home crowd. Akil Thomas and Kyen Sopa entered the zone on a 2-on-1, with Sopa one timing it past the Steelheads’ netminder blocker-side. Lodnia got the secondary assist with the initial pass to Thomas. Johnathon Schaefer, in his first game after receiving the A, laid a massive hit against one of the Steelheads in the defensive zone.

Andrew Bruder scored his first goal of the season to give us the lead in the third period! The assists off his shot from the dot in the faceoff circle went to Billy Constantinou and Ian Martin. Ben Jones scored less than a minute later, off the rebound into an empty net behind Mississauga’s goaltender. Bradey Johnson and Liam Ham assisted the goal.

The IceDogs now lead the season series 2-1 with tonight’s win.

Our next home game is Friday November 9th against the North Bay Battalion. The ‘Dogs will be hosting their Remembrance Day game, honouring past and present military members who sacrificed their lives . Active and retired service members will be given a free ticket to the game and there will be a special anthem presentation by the Lincoln and Welland Regiment Band.

Tickets for the Remembrance Day game on November 9th can be purchased online HERE, or in person at the following locations: