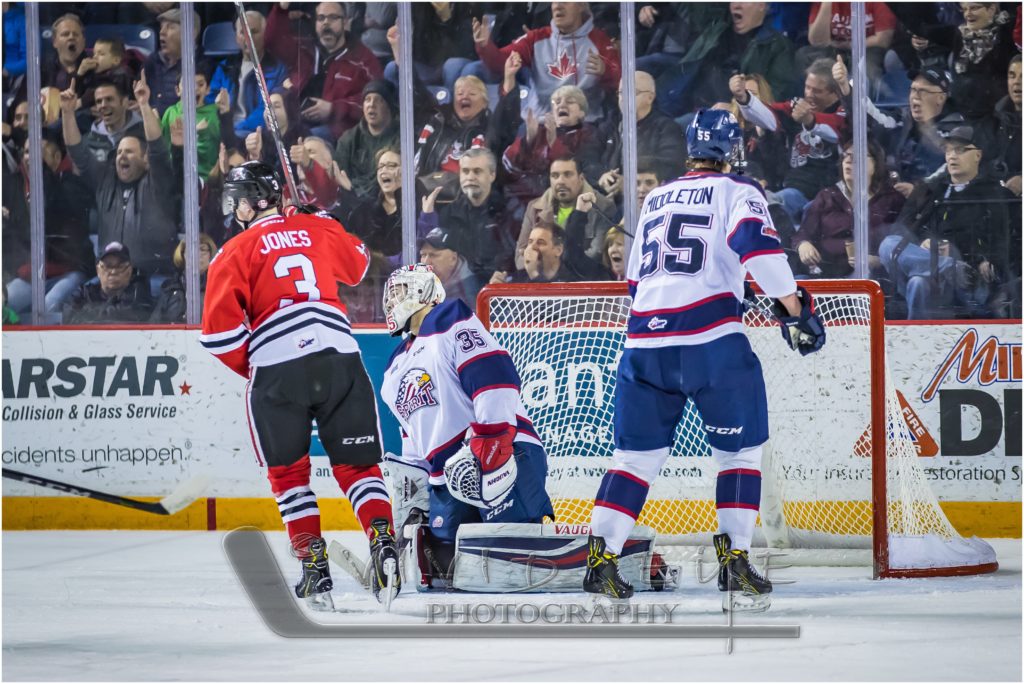 The Niagara IceDogs got the 6-5 win tonight in their only home game against the Saginaw Spirit.

The IceDogs got off to a good start against the Spirit. Stephen Dhillon made a couple great saves to keep it scoreless. However, during a powerplay for hooking, Saginaw scored the first of the game to make it 1-0. The ‘Dogs bounced back quickly towards the end of the period, scoring their first on a 5-on-3. Jason Robertson evened the score with his shot from the side of the net, assisted by Kirill Maksimov and Akil Thomas. Less than a minute and a half later, Robertson scored again on the PP to make it 2-1! His snipe from the faceoff circle was again assisted by Thomas and Maksimov.

The second period was packed with lots of action for Niagara! Lleyton Moore scored his first home goal in the OHL by finding a lane to beat the Spirit’s netminder. His goal was assisted by Ivan Lodnia and Ben Jones. Saginaw scored soon after, cutting the lead to 3-2. On a powerplay, Jason Robertson found a puck at the side of the net to score his third of the night! His hat trick goal on the powerplay was assisted by Thomas and Lodnia to get the 4-2 lead. Jacob Paquette fired off a shot through the lane to get his first goal as an IceDog, assisted by Robertson. Saginaw scored twice towards the end of the period to make the score 5-4.

The third period remained relatively quiet. Captain Jones scored the sixth of the game from the front of the net, assisted by Maksimov and Robertson. Saginaw later scored to cut the lead to 6-5.

In tonight’s 6-5 win against Saginaw, Jason Robertson picked up a hat trick and five points total.

The next game, on Saturday December 8th, is the annual Teddy Bear Toss! Fans can bring new or gently used stuffed animals and throw them onto the ice when the ‘Dogs score their first goal against the North Bay Battalion. The teddies will then be donated to the Niagara Regional Police Association and Victim Services.