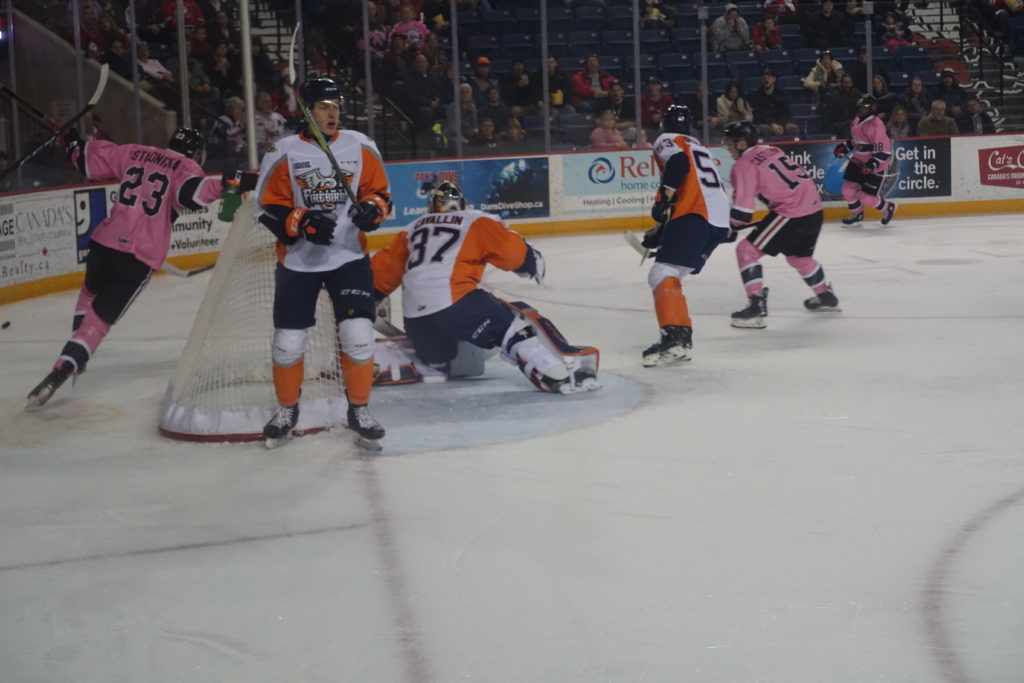 In their annual Pink in the Rink game, the Niagara IceDogs won 7-2 against the Flint Firebirds. Jack Studnicka scored his second career hat trick in tonight’s game, the only home visit by Flint this season.

The first period saw both teams exchange penalties. Flint opened up the scoring a few minutes before the end of the period to make it 1-0.

The ‘Dogs couldn’t help but capitalize on many of their scoring chances in the second period! Outshooting Flint 22-11, they added two goals. The first to even the game at 1-1 was scored by Studnicka! From the point, Matt Brassard sent a pass to Phil Tomasino. Studnicka got his goal off of Tomasino’s rebound. The second goal to take the 2-1 lead was also scored by Studnicka! Thomas, in the faceoff circle, sent a pass towards the net that Studnicka directed behind Flint’s netminder for his powerplay goal. Brassard was credited with the second assist.

The ‘Dogs had nonstop action in the final frame, adding five goals! The third was scored by Thomas, who streaked straight up the ice! His goal was assisted by Jason Robertson. Robertson scored one of his own just a couple minutes later, slipping a snipe from the side of the net past Flint’s goalie. The assists were credited to Kyen Sopa and Thomas. For the fifth goal, from behind the net, Bradey Johnson sent a pass to Thomas in the slot, who got his tally from one knee. Jake Uberti was credited with the other assist. With the sixth of the night, Studnicka got a hat trick! His third of the game was scored from his knee in the slot and assisted by Jones and Robertson. Flint scored to decrease the lead briefly to 6-2, but Ubey scored just over a couple minutes before the end of the third for his first home goal! His quick shot from the side of the net was assisted by Thomas.

With tonight’s 7-2 win against the Firebirds, Jones extended his point streak to 10 games.

After an away game in Guelph on Sunday the 20th, the ‘Dogs are back in town on Thursday January 24th! The home game against Erie Otters will be a Goodwill Donation game. Drop off a bag of donations at any entrance of the Meridian Centre before the game and receive a voucher for a $2 ticket to the game against Mississauga on February 7th!

Tickets remain for Thursday’s game can be purchased online HERE, or in person at the following locations: