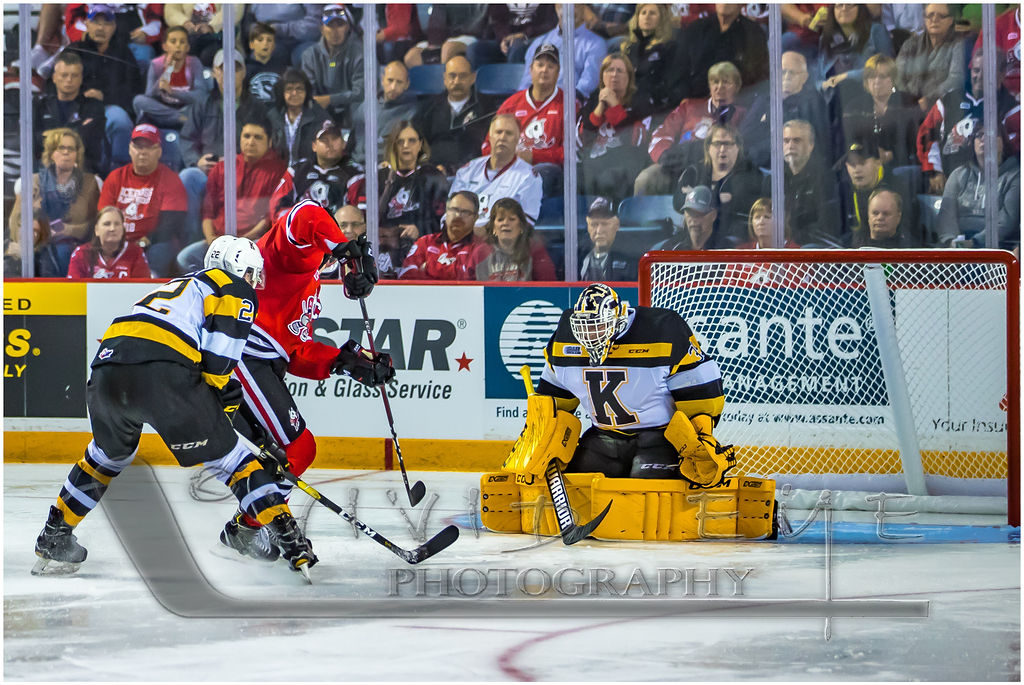 The Niagara IceDogs won 6-3 against the Kingston Frontenacs in Jake McGrath’s first start as a ‘Dog. McGrath faced 26 shots, in contrast to 54 against Kingston. This game was Kingston’s final visit to the Meridian Centre this season.

In the first period, Kingston scored shorthanded to make it 1-0. Just a couple minutes before the end of the period, Akil Thomas scored for the 1-1 tie! From the top of the faceoff circle, Ben Jones passed it to Matt Brassard, at the point, who shot it towards the net. Thomas netted the goal from right in front of the crease! On the play, Brassard got his first point, and assist, as an IceDog.

Kingston scored their second in the second period to regain the lead, but the ‘Dogs bounced back with two goals to put themselves in the lead! Thomas scored his second of the game on the powerplay to make it 2-2. Kirill Maksimov sent a pass to Brassard at the point, who sent it to Thomas. Akil scored from right outside the faceoff dot. Less than two minutes later, Jack Studnicka scored his first goal as a ‘Dog from in front of the net to get the 3-2 lead! Jason Robertson passed it from the corner of the crease to Studnicka for his goal. Phil Tomasino was credited with the other assist.

“I’m glad we were just consistent with our effort. We didn’t try to force things. we just kept going and eventually had a feeling the dam was gong to break,” Head Coach Billy Burke said.

Less than a minute into the last frame, Tomasino netted one of his own to increase the lead to 4-2! Brassard sent a pass to Tomasino, who skated through the neutral zone and around two Kingston players to score from inside the faceoff circle. Closer towards the middle of the period, Maksimov passed to Jones, who fell and slid while netting a wraparound goal! The secondary assist was credited to Elijah Roberts. Kingston scored on a powerplay to cut the lead to 5-3. However, in the final minute of play, Thomas scored an empty netter to earn a hat trick! The assists were later credited to Jones and Maksimov.

“I thought we were better than the score indicated for a lot of the game. You have to give them credit. They’re young, they’re hungry, and they never quit. They can be tough to play against,” Burke continued.

After a trip to Sudbury on Sunday the 13th, the ‘Dogs come back to town to face their QEW rivals, the Hamilton Bulldogs, on Thursday January 17th.