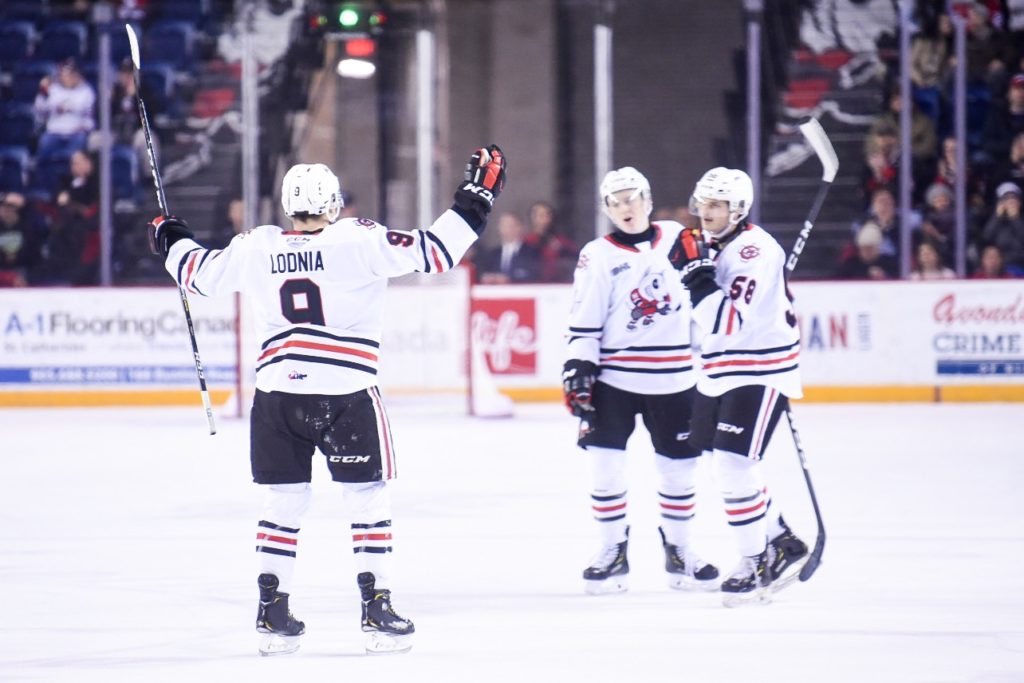 The IceDogs kicked off their two game homestand with a matchup against the Windsor Spitfires for the first time this season on Military Appreciation night. Tonight’s game was Phil Tomasino’s 150th regular season Ontario Hockey League game.

The IceDogs defensemen were looking young and new this game; dressing five rookies and newcomer Adrien Beraldo. This didn’t look to be a problem at the IceDogs kept the veteran Spitfires off the shot clock until 4:01 into the first period. The ‘Dogs offense was off by inches as they had a couple near misses in front of the Windsor goalie. Though the Spitfires were able to capitalize on a chance mid-way through the period to lead 1-0, the IceDogs answered right back with one of their own! Beraldo’s shot from the point had eyes making it through the traffic in front and making its way to the back of the net. Akil Thomas and Ivan Lodnia earned assists on the goal.

We are 🐻-y happy to have you on the IceDogs Beraldo!#IceDogs pic.twitter.com/3TwP3dheoV

Rookie goaltender, Tucker Tynan made some big saves to keep the game tied at one to end the first period,

The IceDogs found themselves in some penalty trouble against the #1 ranked powerplay of the OHL (34.4%). After the IceDogs killed it off it was their turn on the powerplay. Isaac Enright showed some tremendous skill keeping the puck in on the blueline against two Windsor players and then getting a shot on net from the point to end his shift. The period ended in deadlock with the IceDogs out shooting their opponent 16-7 in the second.

In the third, Andrew Bruder hopped in on the scoring, by walking around a Spitfire defenseman to slide one in backhand.

Bruder most get his soft hands from playing video games all the time 🎮#IceDogs pic.twitter.com/eTkiE8TpDa

The IceDogs winning 2-1, found themselves in the box with 2:27 remaining in the game. The Spitfires were able to tie it up with mere seconds remaining on the ‘Dogs penalty.

The IceDogs took this one in OT 3-2, off a breakaway goal courtesy of Ivan Lodnia! Beraldo picked up his second point of the game by picking up an assist. This was the IceDogs first overtime win in the regular season since March 15, 2018 – excluding shootout wins, and is certainly one to remember for the rebuilding ‘Dogs!

It doesn’t get nicer than that 😍#IceDogs | @ivan_lodnia | #mnwild pic.twitter.com/XhAavCN15v

The good times just keep coming! The IceDogs are hosting a meet the player night on Tuesday, November 19th at Swiss Chalet on Fourth Ave! The evening begins at 5:30 p.m. and if you wear IceDogs gear, you will receive a free appetizer!

The deadline for pink jersey name placement donations is November 22. Each name will be placed on the pink jerseys for the Pink in the Rink game on January 31st.

Your IceDogs are back at home on Thursday, November 21 for a battle against the Erie Otters.