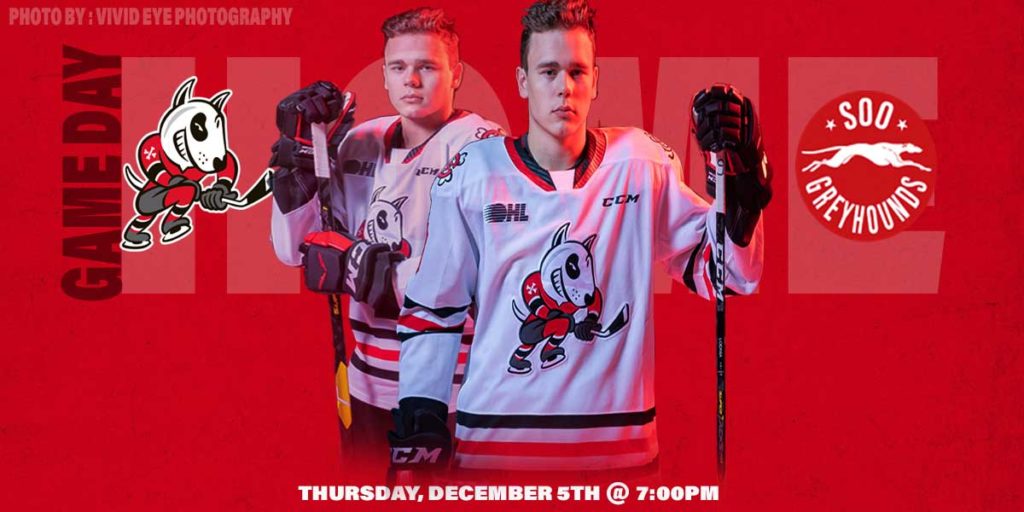 Tonight, the IceDogs return home for the first time since November 21st, after closing out a 5 game road-swing. Although the ‘Dogs lost last night in overtime against Owen Sound, they had great success on the road collecting 7 points in 5 games, which has solidified 6th spot in the OHL Eastern Conference. This evenings game is the first against the Soo Greyhounds this season and is the beginning of a three game homestand.

Both are young teams tonight and are looking to have a successful rebuilding season.

The Soo Greyhounds lineup consists of 6 rookies who have scored 14 goals on the season. Even with the added offense from the first-years, the Greyhounds find themselves in 10th in the Western Conference with a record of 10-15-2-0.

Alternate captain, Cole MacKay is leading the Greyhounds with points, averaging exactly one point per game, through 27 games. He’s a constant offensive threat with 63 shots on net registered thus far. MacKay is having a successful season after attending Las Vegas Golden Knights Rookie Camp in the summer.

Captain Akil Thomas, fresh off being invited to the Canadian National Junior Team Selection Camp, got off four shots on net in last nights game in Owen Sound. Thomas is 7th in scoring in the OHL with 14 goals and 42 points, which is also good enough for 8th in assists. Not only does Akil show tremendous skill in his offensive ability, he is a great leader on the ice for the young IceDogs. Akil and the ‘Dogs will be looking to continue their offense and get back in the winning column in tonight’s game.

Purchase tickets and head to the Meridian Center to cheer on your Niagara IceDogs. Tickets are starting as low as $10/person and can be purchased online HERE, or in person at the following locations: