IceDogs Acquire Butler, and Picks in Exchange for Akil Thomas 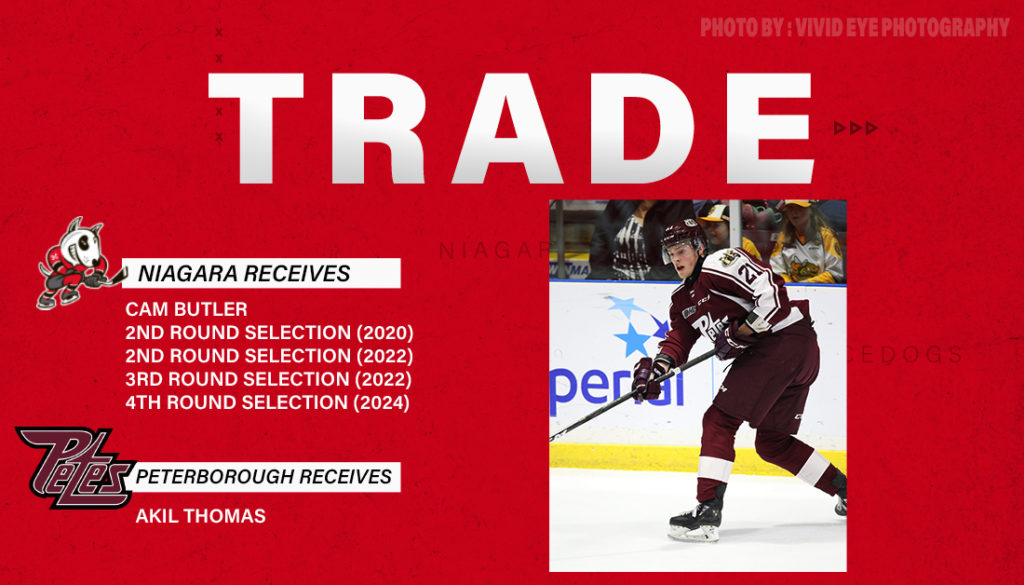 In exchange, the IceDogs have received 17 year older forward Cameron Butler, and the following picks in the Ontario Hockey League Priority Selection:

Butler, from Ottawa, ON, is in his second OHL season. In the 2018-19 season, he played 64 games, totally 26 points (18 goals, 8 assists). 39 games into the 2019-20 season, he is on pace to have a career high in points. He was ranked on NHL Central Scouting’s Preliminary “Players to Wach” list, ahead of the 2020 NHL Entry Draft. He has been described as having a big body, who can skate, and has a great shot. He can use his size to his advantage, along with good speed.

“I have been a huge fan of Cam since his draft year and have always wanted him in Niagara.” Said General Manager Burke. “Cam brings a complete package with size, skill, speed, grit, and at 17 already possesses one of the best shots in the league”.

“This is easily the hardest trade I have ever made. Akil was the first player I ever drafted, and is my favourite IceDog of all time. There were a lot of tears shed this morning in Niagara. At the end of the day, we all know Akil will be in LA next year. We needed to add an exciting young player, and we get that in Cam Butler.”

The LA Kings 2018 2nd round pick (51st overall) signed an NHL Entry-Level Contract in March 2019. He recently returned from the 2020 IIHF World Junior Hockey Championship, where he scored the game winning goal against Russia to win the gold medal for Canada.

He leaves Niagara as one of the franchise’s most successful players ever. His 275 points is third all-time, and his 96 goals is fourth all-time.

“It’s a day of mixed emotions. While we are all very sad to see Akil go, we are extremely excited to be bringing Cam in with some nice draft picks to continue our rebuild. It’s a great fit for both players. I hope to see PBO make a long playoff run this year” Burke continued.

The Niagara IceDogs would like to thank Akil for everything he has done for the team, organization and community, and wish him all the best in his career and beyond.