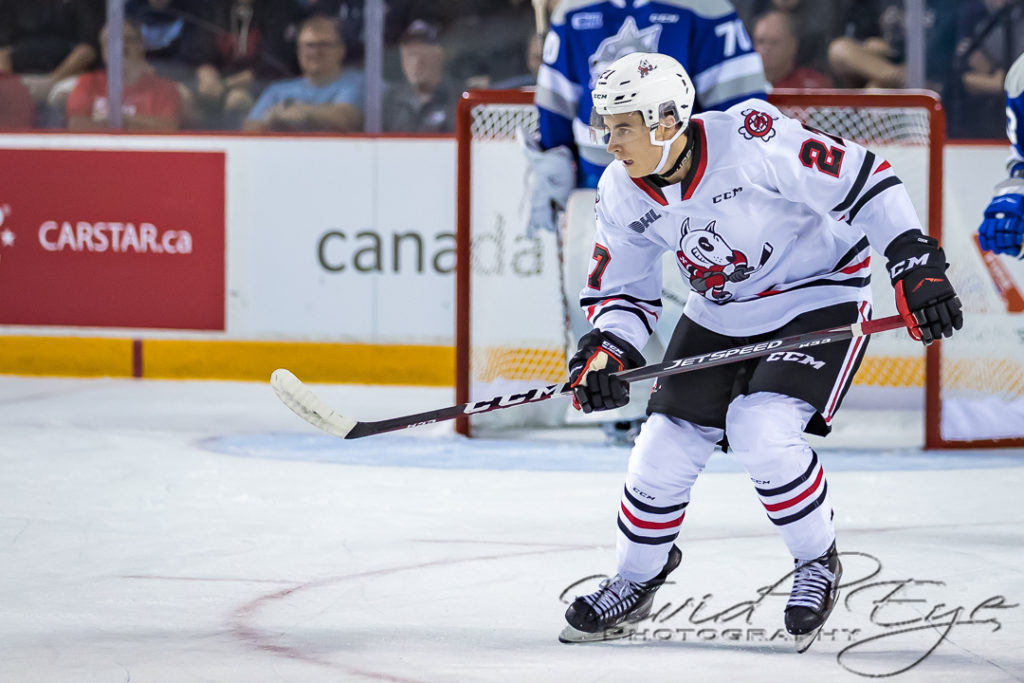 The IceDogs closed out this weekend’s northern road trip with a visit to the Sudbury Wolves. In the third game of the series between these two teams, the tie was going to be broken with one team getting the edge.

The IceDogs were without Captain Ivan Lodnia, Cam Peters, and Lucas Theriault  (illness). Andrew MacLean got the start in net.

The IceDogs opened the game with a different level of jump than they’ve had in previous games. They pushed the pace, and forced the Central Division’s top team to work hard in their own zone. The Wolves scored the game’s opening two goalss, but the ‘Dogs’ rookies got Niagara on the board before the end of the first. Ethan Sims’ shot on net bounced out in front to Anthony Agostinelli, who potted home his fourth of the season.

A👻inelli snuck in to the crease to pot home the rebound from Sims’ shot! @aagostinelli3 | #IceDogs pic.twitter.com/muNzn5kbGk

Anthony Agostinelli scored his second of the game, after being left alone in the slot to finish off a Jake Uberti wrap around.

The Wolves forgot about Gus, but we’ll take the tally 🚨@aagostinelli3 | #IceDogspic.twitter.com/QEtufeFie4

A disallowed IceDogs goal changed the momentum of the period. The Wolves scored five in the middle period, but the IceDogs prevailed into the third.

Niagara came out flying in the third period, and capitalized a minute and 31 seconds in! Jake Uberti notched his 13th of the season after Cam Snow picked off a turnover and found him all alone in front of the net.

The IceDogs outscored, and outshot the Wolves 9-5 in the third period. The IceDogs’ ultimately fell to the Wolves, but didn’t take their foot off the gas pedal throughout.

With a week of practice leading into Thursday’s home game, there are several positives to continue building on.

The IceDogs are home at the Meridian Centre on Thursday, February 13th to take on the Barrie Colts! Tickets are starting as low as $15/person and can be purchased online HERE, or in person at the following locations: