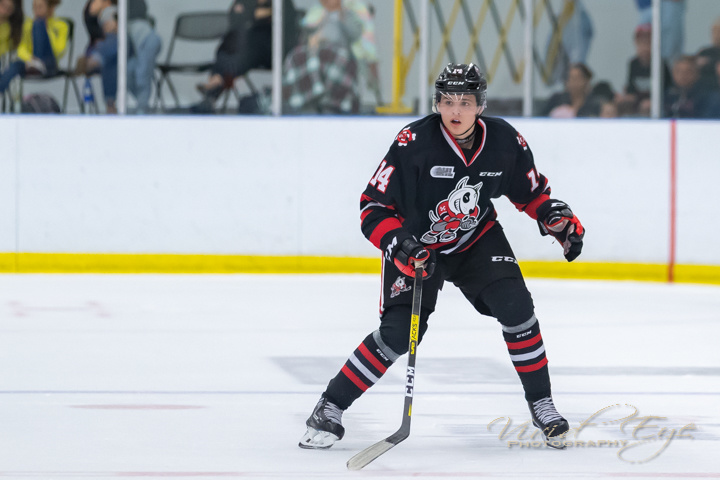 The Niagara IceDogs continued their home exhibition schedule in Fort Erie tonight against the Windsor Spitfires. Christian Sbaraglia got the start in net for the home side, with Tucker Tynan slated to back-up. Recently committed Dakota Betts saw his first Ontario Hockey League action, pairing with Giancarlo Chanton.

Windsor opened the scoring midway through the opening period. On an ensuing penalty kill, Sbaraglia made a series of great saves that drew loud cheers from the crowd to keep the IceDogs within one. Cameron Snow notched his first goal of the pre-season from the face off circle off a feed from Lucas Theriault. Jonah De Simone picked up the secondary assist on the power play goal. Windsor added another goal to carry a 2-1 lead into the first intermission.

Rookie goaltender Tynan took over in goal to start the second period. The Spitfires capitalized in the opening minutes, but Kyen Sopa brought Niagara within one once again. Sopa tipped a shot from Elijah Roberts that was initially stopped by the Windsor goaltender, but he netted the rebound with nearly five minutes remaining. Jonah De Simone was credited with his team leading fourth pre-season point on the second assist.

Windsor opened the third period with a goal to re-take their two-goal lead. The IceDogs’ offence sustained the most pressure on the Spitfires than they had all game. Over eight minutes into the period, a De Simone shot from the slot sneaked under the Windsor netminder and over the goal line. The Spitfires added two quick consecutive goals, but it was AJ Cook who brought life to the Fort Erie Leisure Plex with 1:25 to play. Cook’s first goal of the pre-season was assisted by Snow and Ethan Sims. With Tynan on the bench for an extra attacker, Chanton made a great play deep in the defensive zone to prevent Windsor from scoring an empty net goal.

The Spitfires emerged victorious 6-4 at the end of regulation.

After nearly two weeks off, the IceDogs return to pre-season action at home on September 13th against the Peterborough Petes. Click here for all ticketing options.