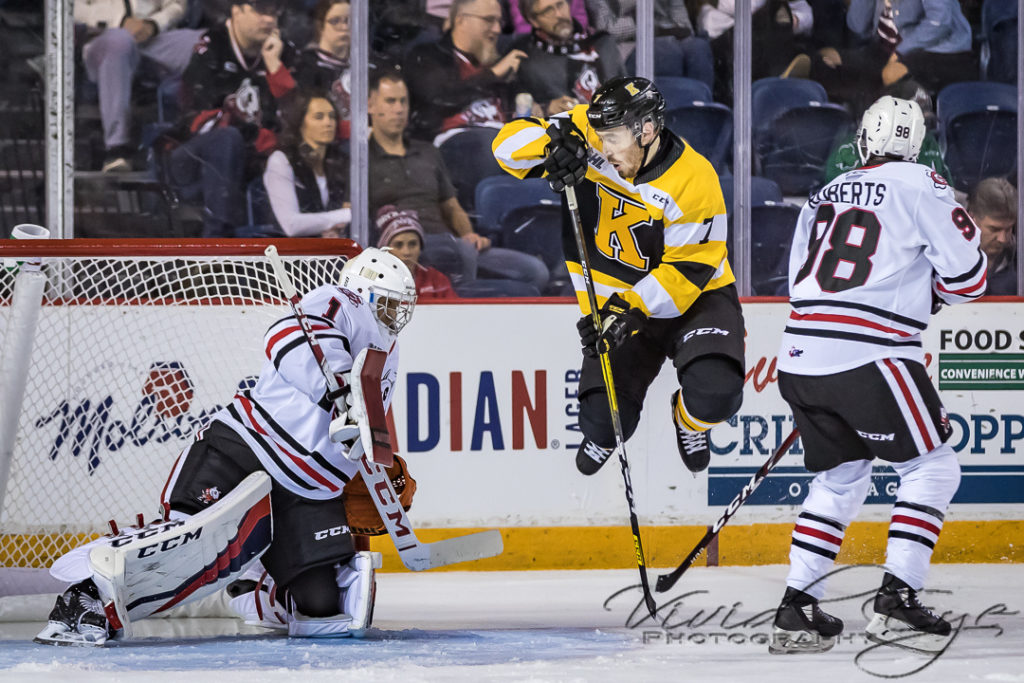 The Niagara IceDogs traveled to Kingston to complete the home-and-home with the Frontenacs. Following the 8-4 offensive outburst last Friday against Kingston, the IceDogs were prepared to keep their special teams rolling.

Although the Frontenacs capitalized first early in the game, the IceDogs power play got them right back to where they wanted to be. Howard, whose first goal of the season came on a shorthanded rush, jumped down to the goal line and received a feed from Phil Tomasino. Howard split the goaltenders legs to score low for his second of the season. The Frontenacs re-gained the lead, but it was Dakota Betts who brought the IceDogs back to an even score with his first OHL goal of season! Defencemen Drew Hunter and Mason Howard were credited with the assists on Betts’ equalizer.

In the second period, the IceDogs seemingly started clicking – connecting on more plays. Billy Constantinou scored for the Frontenacs, but on an ensuing penalty kill, Phil Tomasino capitalized shorthanded while killing a penalty. Kyen Sopa took advantage of a turnover in the neutral zone, and fed the Predators first rounder for his sixth of the season.

Despite some chances and great saves by rookie goaltender Tucker Tynan in overtime, this game needed more than 60 minutes.

Kingston took this one 4-3 in overtime.

Following tonight’s game, the IceDogs return home tomorrow night to a Thanksgiving showdown against our Central Division rivals to the north, the Battalion. In a re-match from last year’s Eastern Conference quarter-final, both teams have made significant chances since they last met.