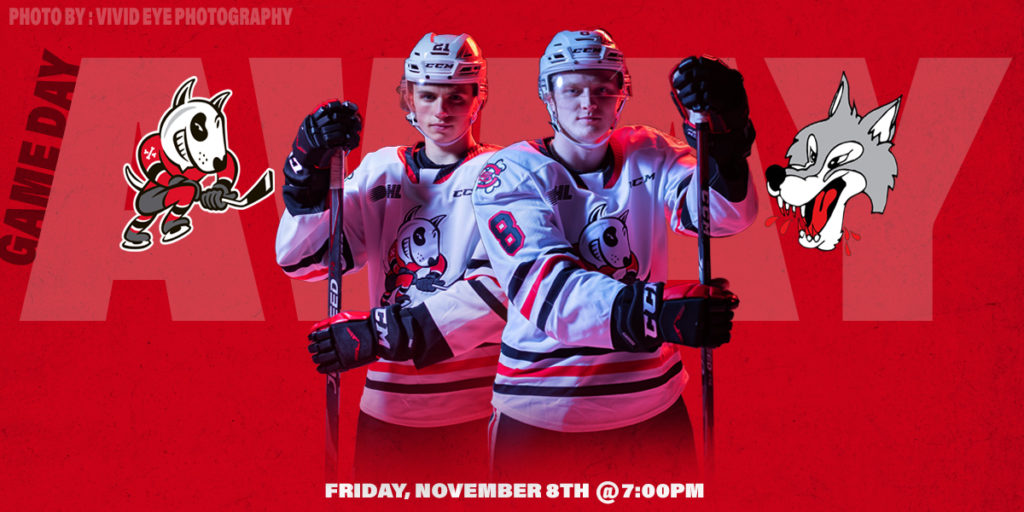 The ‘Dogs are headed north for the first time this season to take on the Sudbury Wolves. When these two canine teams faced each other, in the IceDogs’ home opener, Niagara was victorious 6-3. Phil Tomasino had 3 points (2G, 1A), Oliver Castleman and Kyen Sopa had 2 points each (1G, 1A), and Jackson Doherty picked up his first point as an IceDog.

Niagara will be facing top 2020 NHL Draft prospect Quinton Byfield tonight. The last time these teams met, he scored two of the Wolves’ three goals, with 6 shots on goal. A bigger frame, standing at 6’04” and 215lbs, Byfield poses a significant threat to the young IceDogs’ defenders, who are likely to be without Mason Howard and Elijah Roberts. With 33 points on the season, 12 goals and 21 assists, Byfield will be a tough test for the IceDogs.

Although he played four games in the 2018-19 season, Ethan Sims is still considered to be a rookie with this young and developing IceDogs team. In 15 games this season, Sims has scored his first Ontario Hockey League goal, against his hometown team, the Bulldogs, and put up 13 shots on goal. The 2018 OHL Draft fifth rounder is making a case to earn consistent minutes, and using the experience of having played four games the year before to help guide him through the difficult situations in a developing year for the team. Against the Wolves in his season opener, Sims put up 2 shots on goal and won 30% of the face-offs he took. Averaging minutes between the third and fourth lines, fans can expect Ethan to be looked upon to be amongst the future of the IceDogs down the middle.

Despite having played last night in Kitchener for the CIBC Canada-Russia Series, Captain Akil Thomas and Alternate Captain Phil Tomasino are expected to play tonight in Sudbury.

Tonight’s game will be broadcast live on YourTV Niagara, OHL Live, Newstalk 610 CKTB. Live updates will be provided on the IceDogs’ twitter page.