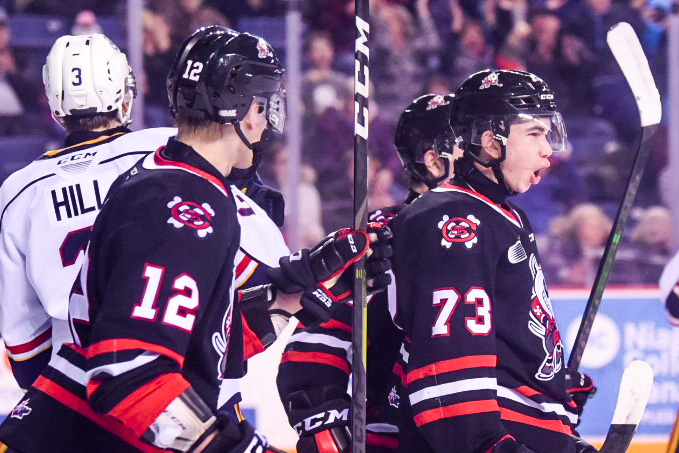 Tonight, The Niagara IceDogs took on the 6th place, Eastern Conference Colts at the Meridian Centre.

The first period started with a string of penalties that the IceDogs took advantage of. In Ivan Lodnia’s return to the lineup, he assisted the ‘Dogs power play marker that saw Jake Uberti potting his 14th goal on the season.

The Colts answered back with 5:21 remaining in the first. Rookie Cameron Snow had an extra jump in his step on the third line as he showed off his speed and passing ability which lead to multiple scoring chances. The score remained tied 1-1 going into the first intermission, with the IceDogs leading in shots 15 to 10.

The second period saw the Colts tally 3 and take the lead 4-1. Mason Howard stood out on the backend putting his body in front of shots and continuing to play physical. Dakota Betts also broke up a quality 2 on 1 chance by the Colts mid-way through the period.

The third period saw the IceDogs put 11 shots on net and win 9 faceoffs, but it wasn’t enough as the Colts take the win, 4-1.

The shots were even after 60 minutes of play with each team getting 34 each.

Tonight’s game showed significant growth, and commitment to their systems.

Tomorrow night’s game will include Valentine’s Day specialty jerseys that will be live auctioned off post-game. The proceeds will be donated to Mainstream Niagara, Community Living ST. Catharines, and RAFT. Commemorative mystery pucks will also be sold on the concourse; any puck purchased that was signed by an IceDogs player in silver will include a redeemable prize.