IceDogs look to Continue Their Offense Back Home Against the Battalion 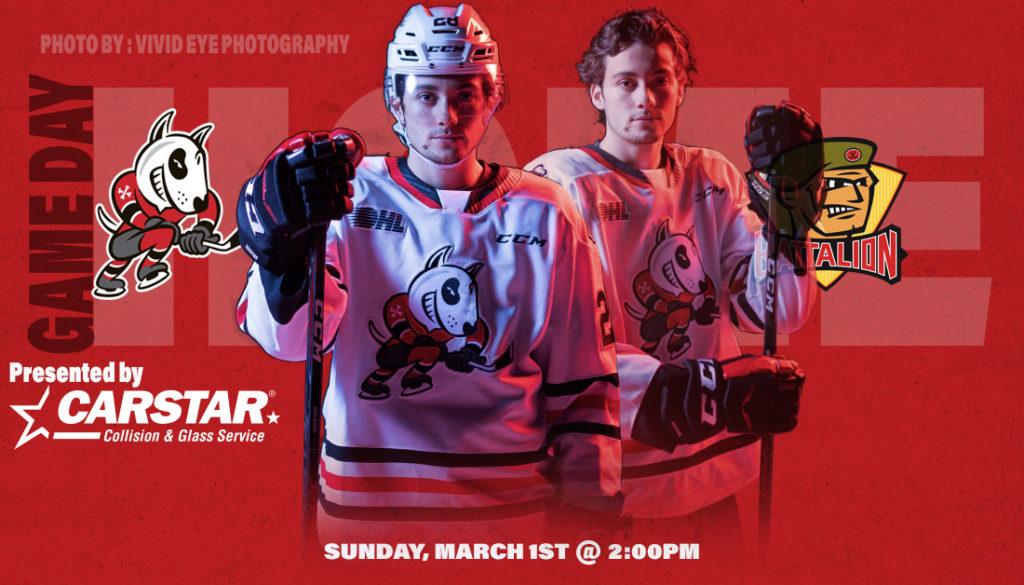 This afternoon, the Niagara IceDogs return home from a 3 game road trip that saw the ‘Dogs get back into the winning column. With only 8 games remaining in the season, the IceDogs are looking to beat North Bay on home ice to gain back their 8th place playoff position in the Eastern Conference.

This will be the fifth time that these two teams hit the ice against one another. Currently, the North Bay Battalion leads the series 3-1.

The IceDogs are expected to be without forward Cam Peters, who is listed as month to month with a lower body injury.

Although North Bay is sitting in 10th spot in the Eastern Conference, they have picked up points in 5 of their last 10 games – 3 being wins. With 11 rookies on the Battalion roster, they reflect the ‘Dogs rebuilding team.

North Bay centreman, Luke Moncada, has steadily improved his offensive ability throughout the season which has led to him leading the Battalion in points. In his last ten games, Moncada has picked up 7G and 8A to extend his point total to 33G and 24A on the season. The ‘Dogs will have to be aware of Moncada on the power play, as he has tallied 7 short handed goals on the season.

The IceDogs’ heart and tenacity has begun to pay off up and down the lineup. Captain Ivan Lodnia scored  in a hard fought loss on Friday night. The goal set a new career high for Lodnia at 25 and was the OHL play of the night. Jackson Doherty also stood out earlier this week extending an IceDogs lead with a smooth toe-drag and a quick release ending up in the back of the net.

Specifically, against North Bay: Jake Uberti has three goals on the season, Andrew Bruder has 1G and 2A, and defensemen Mason Howard has tallied a hat trick.