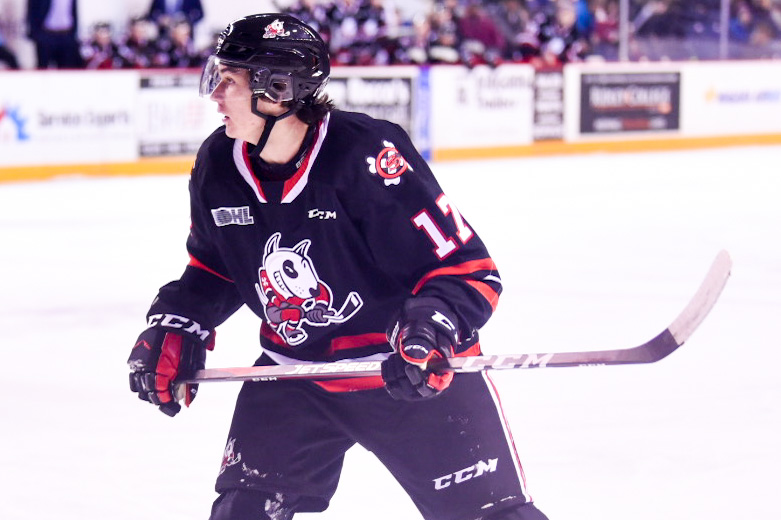 Tonight, the Niagara IceDogs played in their second Central Division matchup in as many nights against the North Bay Battalion. After a win last night, the ‘Dogs find themselves back in the mix of the Eastern Conference points race.

The IceDogs came out flying with Jackson Doherty getting a shot on the Battalion goaltender 8 seconds into the game. In a back and forth period, Niagara’s young defensive core make strong defensive plays under pressure, including Landon Cato standing up a Battalion forward at the IceDogs blueline and Giancarlo Canton executing breakout passes. Towards the end of the period, Captain Ivan Lodnia was kneed and helped off of the ice.

In Lodnia’s absence, Cameron Butler slid onto the top ‘Dogs line and got off a couple of good chances on net. Lodnia did return to the ice for a couple shifts in the second period before heading back to the dressing room. Rookie Lucas Theriault got a backhander off in close to the Battalion goaltender in an attempt to unknot the score at 0. The period closed out on a rough note.

The Battalion scored an unlucky goal with 6:40 remaining in the game and added an empty net goal. Rookie, Anthony Agostinelli responded back with his 3rd goal on the season from the slot with 43 seconds remaining.

Unfortunately, the Battalion scored one more empty net goal to take the game 3-1. Recently acquired, Cameron Peters, had a successful outing against his former team. Peters was 12 for 16 in the dot and got off 5 shots on net.

The IceDogs will wrap up their 3 in 3 weekend in Peterborough tomorrow night, before returning home on Thursday, January 23rd,  to faceoff against the Mississauga Steelheads. Tickets are starting as low as $15/person and can be purchased online HERE, or in person at the following locations: