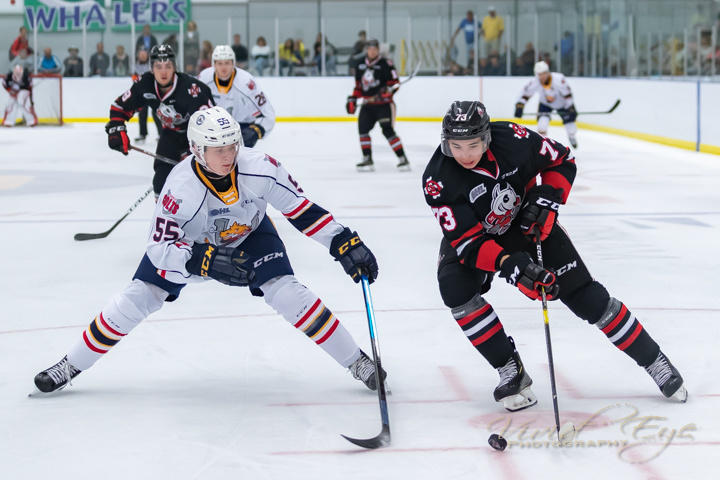 The Niagara IceDogs continued their exhibition schedule tonight in Barrie, taking on the Colts for the second time this pre-season. Rookie goaltenders Tucker Tynan and Josh Rosenzweig split the crease in tonight’s game.

Deadlocked at a scoreless draw through one period, the IceDogs dominated in the face-off circle, winning 68%. Lucas Theriault won 6/9 of his draws, while Ryan Campbell and Jake Uberti each won 4.

In the middle frame, the Colts opened the scoring with three consecutive goals. Niagara surpassed their shots on goal total to over the 20-shot plateau, while leading in the face offs won category. Jackson Doherty had the IceDogs best scoring chance through 40 minutes, but was stopped in tight on a breakaway.

Niagara got on the board midway through the final period of regulation off a goal by Bradey Johnson. Johnson’s first of the pre-season was assisted by Anthony Agostinelli and Doherty. Less than a minute later, on the power play, team pre-season scoring leader Jonah De Simone brought the IceDogs within one! With the Niagara net empty for an extra attacker, the Colts capitalized twice to take this game by a score of 5-2.

The Niagara IceDogs are back in action tomorrow night in Beamsville to take on the Peterborough Petes! Click here for all ticketing options.