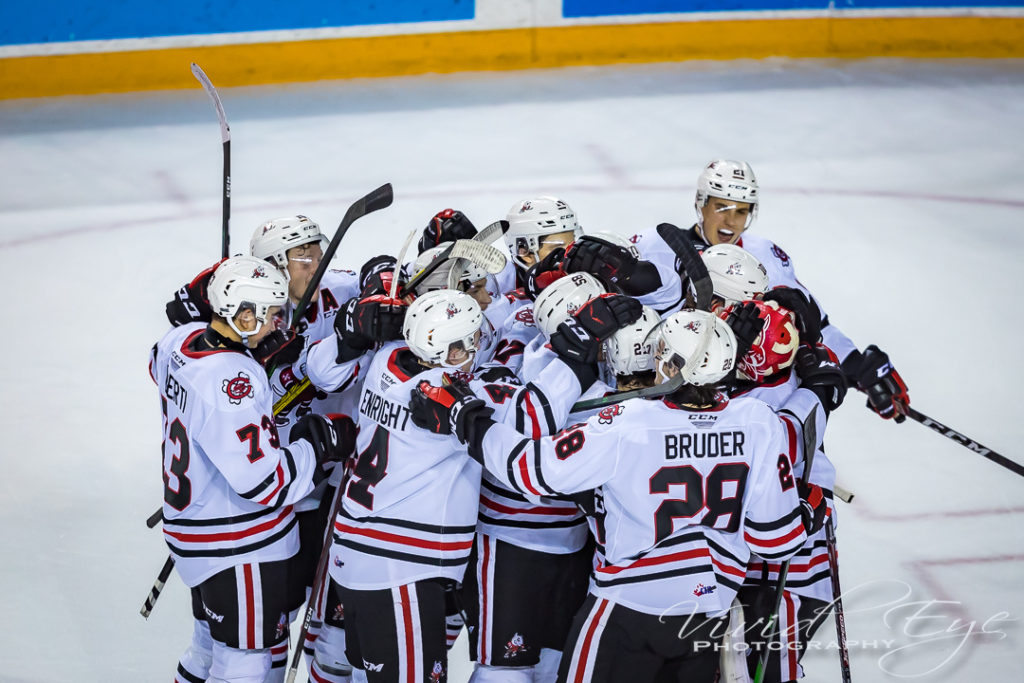 The young IceDogs kicked off their 5-game road trip tonight in Barrie looking for redemption from the last time they visited the Colts (where they scored 3 goals in literally 4 minutes). After collecting a point in each of the last 4 games, including 3 wins, the IceDogs wanted to get off to a good start in Barrie.

Just 34 seconds into the first period, Ivan Lodnia got things going on the scoreboard. Lodnia scored his 10th goal of the season in tight off a feed from Jake Uberti, who battled hard behind the net.

🌴 34 seconds into the game, @ivan_lodnia opens the scoring!

🐶 1 | 0 🐴#IceDogs goals are powered by @GetMammothpic.twitter.com/Z0XvCJHptu

The IceDogs, whose average age is 17.8 years old, held the Colts to just 2 shots through the first 10 minutes of the period, which included a man advantage. Comparatively, the ‘Dogs had 7 shots on net. Around the 12 minute mark of the first period, the Colts got on the board with a goal of their own. But the tie game didn’t last long, as Jonah De Simone potted home his third of the year with a beautiful wrister. Cameron Snow picked up his first Ontario Hockey League point with the assist.

The Colts tied the game, and the game was tied heading into the second period. The rebuilding ‘Dogs finished the period with 14 shots on net.

Niagara opened the middle frame with four straight shots, once again holding the Colts off the scoresheet for the opening 5 minutes. Just as it looked like Barrie was going to take control of the game, the IceDogs’ veterans Thomas and Lodnia came together to give the IceDogs the lead early in the second period. Lodnia’s second of the game was also assisted by Adrien Beraldo.

Four minutes later, Nashville Predators first round selection Phil Tomasino got in on the fun. Similar to Kyen Sopa‘s goal on Thursday, the Castleman-Tomasino-Sopa line scored a not technically empty net goal, but with the goalie so far out of position, it was an empty net goal. Oliver Castleman did a great job of pulling the goalie out of his crease, and found Tomasino to take advantage.

When you wanna get Tomo away from the puck and an empty net but he’s already scored 🤙@philtomasino26#Preds | #IceDogspic.twitter.com/0NruOCKCiX

The IceDogs added 11 shots on net in the second period, and lead 4-2 after two periods.

Ivan Lodnia and the IceDogs  started the third period just as he had the previous two, with a goal! Sprung on a breakaway as a penalty to Mason Howard expired, Lodnia made no mistake to extend the IceDogs’ lead to three, with the hat-trick goal – the first of his OHL career. With just over 7 minutes remaining in the game, Akil Thomas took on a breakaway of his own, this time at even strength, and extended the Niagara lead to 4. Thomas’ 6-2 goal was the 92nd of his career, tying former IceDogs forward Brendan Perlini for 4th on the IceDogs all-time goals scored record.

The IceDogs held on to the 6-2 lead to extend their point streak to 5-games, and win streak to 3!

Goaltender Christian Sbaraglia picked up his first win of the season!

Your IceDogs don’t return home to the Meridian Centre until Thursday, December 5, against the Soo Greyhounds, and then host their Ugly Christmas Sweater/Teddy Bear Toss Game on Dec. 7th!