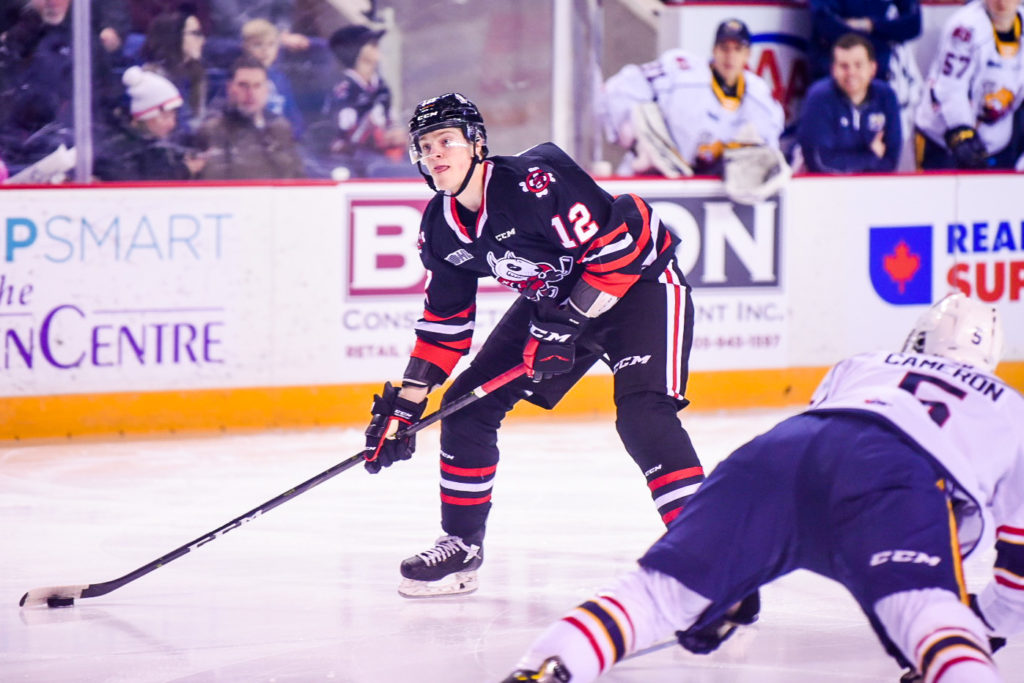 The Niagara IceDogs kicked off their 3 in 3 weekend at the Meridian Centre with the Barrie Colts as their opponent. These two young teams will be seeing a lot of each other in the next two months, but currently the season series is tied up at 1.

The Barrie Colts struck first to take the lead in the first minute of the game. The young IceDogs stuck to their game plan and ended up getting 12 shots on net from 10 different players in the first period. Goaltender Sbaraglia made a massive save with five minutes remaining in the period to keep the game within one. Rookie Lucas Theriault was 3 for 4 in the face-off dot.

The second period was all IceDogs, with two goals being scored to take the lead. Ivan Lodnia scored the game tying goal off a feed from fellow winger Oliver Castleman. The assist extended Castleman’s point streak to 15 games in which he has 9 goals and 15 assists.

The scoring continued with Cameron Butler’s first as an IceDog. Recently acquired Cameron Peters picked up his first point by assisting the go ahead goal in his home debut.

Not a bad first goal as a ‘Dog 🤩#IceDogs | @CButler_21 pic.twitter.com/gha4XxRLiV

To end the middle frame, goaltender Sbaraglia made a highlight reel save sliding across his crease to keep out a 2 on 1 chance.

The Colts got two power play markers in the third to take the lead back with a score of 3-2. In the dying minutes of the game, Castleman tied the game back up at 3 with the IceDogs own power play goal.

The IceDogs take this one in the shootout with Sbaraglia stopping all three shots and Lodnia beating the Barrie goaltender blocker side.

.@ivan_lodnia scores the lone goal in the shootout! 🚨#IceDogs pic.twitter.com/HIcugK3MTo

The IceDogs will be back in action at the Meridian Centre tomorrow night against the North Bay Battalion. Tickets are starting as low as $15/person and can be purchased online HERE, or in person at the following locations: