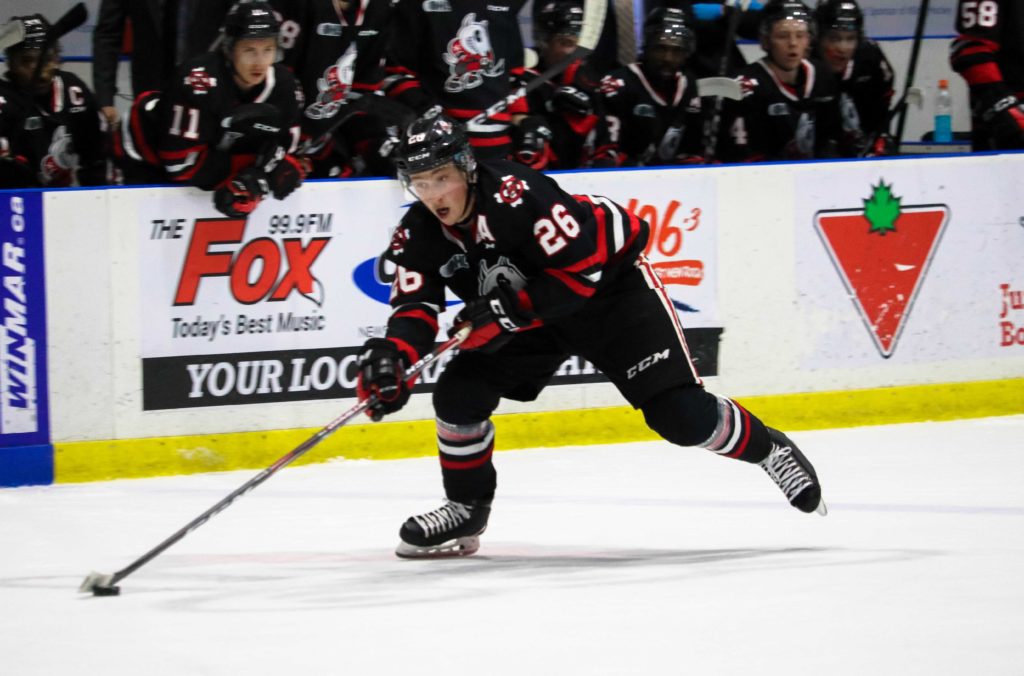 The ‘Dogs closed out this weekend Saturday night against the Windsor Spitfires. In the second of back to back road games, the IceDogs were looking to keep the momentum going, after defeating the Sarnia Sting Friday evening. Back to back games on the road can be really tough, and the young IceDogs’ energy levels are still adjusting to the schedules of quick road trips like this weekend.

The last time these two teams faced off, Ivan Lodnia scored the game winning goal with 1.1 seconds remaining in overtime at the Meridian Centre. The Spitfires, nearing their oldest years in the junior hockey cycle posed a tough opponent for the rebuilding ‘Dogs. Windsor opened the scoring nearing the midway point of the first period with two consecutive goals. The IceDogs hit the post of the Windsor net twice but couldn’t get the puck into the net in the opening frame.

The IceDogs really came out to play in the second period, scoring two quick goals in four minutes! On a power play, three and a half minutes into the period, Phil Tomasino scored his 16th goal of the season, from one knee, roofing the puck into the net.

Phil doesn’t even need to be on both feet to score 🚨@philtomasino26 #Preds | #IceDogs pic.twitter.com/5G4PAWLSYF

Then, at the tail end of another power play, Captain Akil Thomas scored his 14th of the season, to tie the game up at 2!

Niagara added their third consecutive unanswered goal just over a minute into the final period, to take their first lead of the game, as Phil Tomasino scored his second goal of the night!

GOAL 🚨 @philtomasino26 gives us the lead early in the third!

The Spitfires seemingly turned up their game, trying to score the game tying goal, but Tucker Tynan made several big saves to maintain the IceDogs’ lead. Tynan stood on his head when Niagara had to kill a penalty with three minutes to play, and the Spitfires had pulled their goaltender for the extra attacker.

Niagara held on to complete the winning weekend with a 3-2 victory over the Western Conference’s 2nd place Spitfires. They also won the season series against Windsor.

Only one more game on the road! The ‘Dogs are headed to Owen Sounds on December 4th, and don’t return home to the Meridian Centre until Thursday, December 5, against the Soo Greyhounds. Then, they host their Ugly Christmas Sweater/Teddy Bear Toss Game on Dec. 7th!