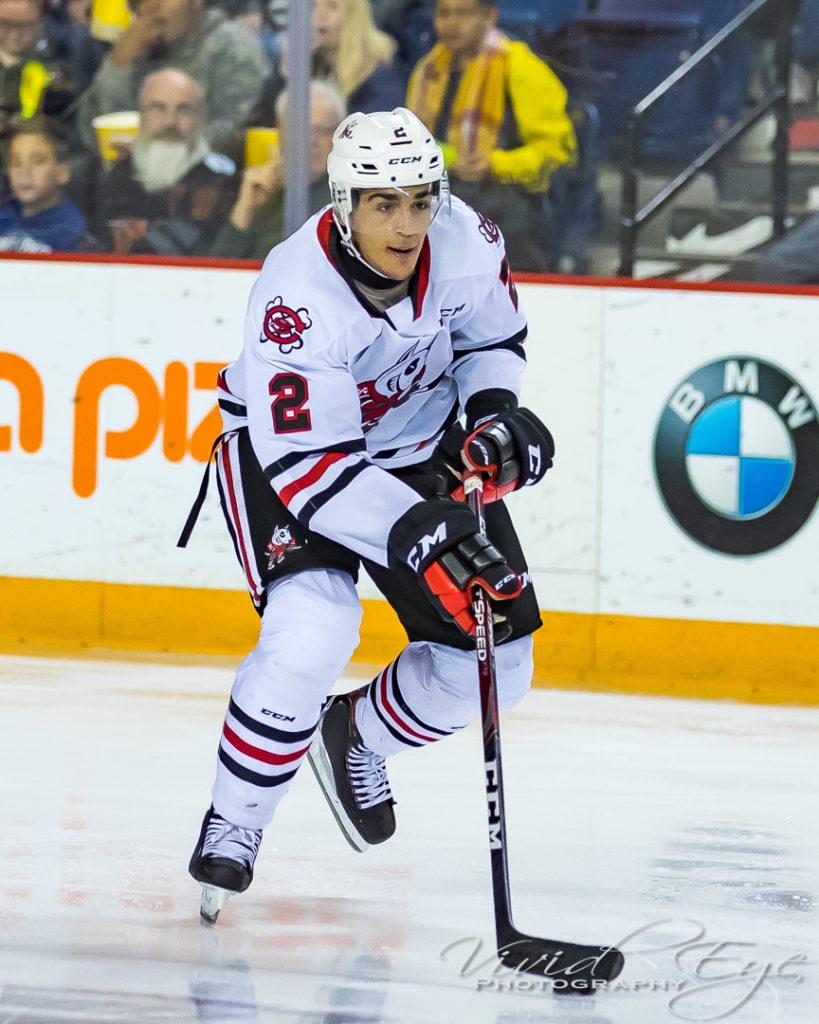 The Niagara IceDogs kicked off this weekend’s road trip with a Friday evening match-up against Central Division rivals, the Sudbury Wolves. Christian Sbaraglia got the nod between the pipes, for his eighth start of the season. Newly acquired defenceman Adrien Beraldo donned the IceDogs uniform for the first time. The rebuilding ‘Dogs were looking for a big divisional game to put the systems practiced to the test, and gain some  valuable Ontario Hockey League experience against a team further into the junior hockey development cycle.

Although they played significant minutes in last night’s CIBC Canada-Russia Series game, Phil Tomasino and Akil Thomas were in the lineup for Niagara. Thomas took his place on the blueline. While not listed as a defenceman on the Niagara roster, Thomas’ experience playing defence in minor midget, along with OHL veteran Beraldo, was a calming presence to the developing Niagara defenders, who were without Mason Howard and Elijah Roberts.

To start the game, rookie forward Lucas Theriault took the reins down the middle with Andrew Bruder and Jonah De Simone on the wings. The Wolves got possession off the face-off, but Theriault had an early shot block that forced the puck out of the Niagara zone and into Sudbury’s. Both teams got their chances with the man advantage. The shots in the first period, though, were nearly even, with the IceDogs getting 8 shots on net and the Wolves with 11. Sudbury capitalized twice, once on the power play, to carry a 2-0 lead into the second period.

Early in the second period, Andrew Bruder had the IceDogs’ best scoring chance in all alone. He stickhandled into the slot and got the shot off, but he wasn’t able to slide it under the goaltenders pads. The penalties continued to be exchanged in this period, although both teams killed theirs. Christian Sbaraglia made a great save in tight midway through the period to keep the IceDogs within two. Niagara put in consecutive good shifts in the offensive zone, matching their shot totals from the previous period. The Wolves doubled their lead with two goals in the second.

Sudbury opened the third period with two quick goals, to take this game 6-0. Despite the loss, the game was not without its moral victories helping the developing ‘Dogs gain some confidence. Although he was unable to capitalize, Ryan Campbell was inches away from his first OHL goal, with the help of fellow rookie, Cameron Snow. The IceDogs also put up consistent shots all game.  Sbaraglia faced 40 shots, while the ‘Dogs put 28 shots on net.

The IceDogs are on the road for two more games, including Sunday in Hamilton, before returning to the Meridian Centre on Saturday, November 16th, verses the ­­­­Windsor Spitfires, for Military Appreciation Night.