IceDogs take the stinger out of Sarnia with 5-2 win 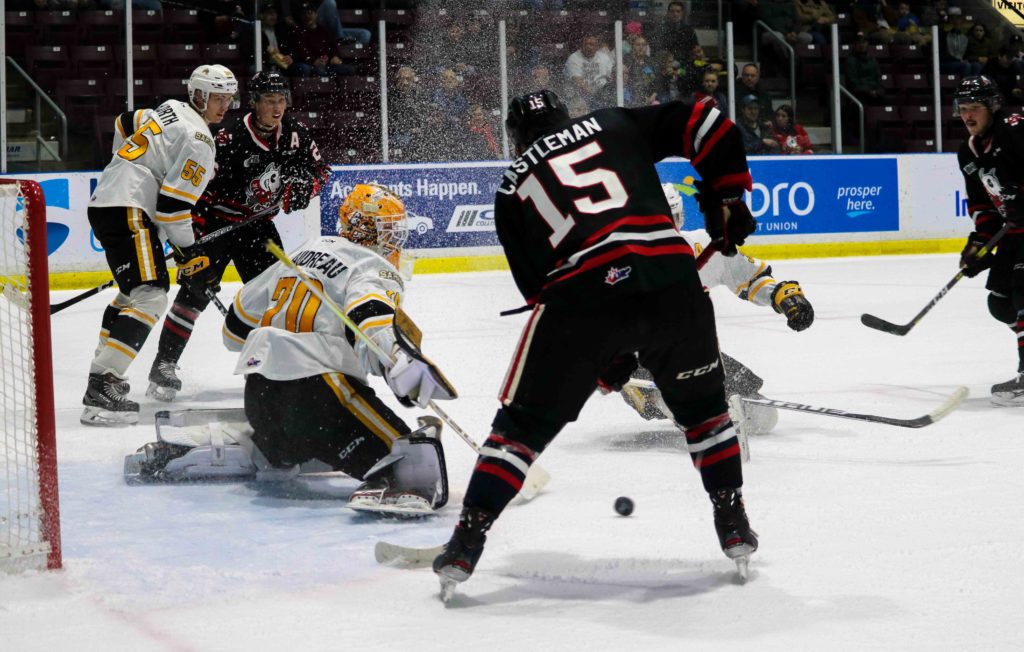 The IceDogs opened this weekend’s back to back road games in Sarnia. The IceDogs had a week to rest and regroup, after capturing 4 of a possible 6 points last weekend. Based on points on the standings, the IceDogs and Sting are considered equal. Each team has 22 points thus far in the season, although the IceDogs are considered to be in year one of their rebuild, while Sarnia are further along in their development.

The IceDogs defense saw the return of veteran, and alternate captain, Elijah Roberts, who returns after missing nearly a month to injury.

Roberts’ presence was felt almost immediately, as he assisted on the games opening goal, off a wrist shot from Ivan Lodnia. Lodnia’s 13th goal of the season was also assisted by Captain Thomas.

The Sting came back to tie the game at 1 before the end of the period.

The start of the game seemed to be a feeling out period, as these two teams didn’t know what to expect, but as the second period wore on, they started to look much more comfortable. Rookie goaltender Tucker Tynan made a series of great saves to keep the game tied at 1.

Thomas slid into fourth in IceDogs All-Time goal scoring tonight, as he scored his 93rd goal of his OHL career, surpassing Brendan Perlini’s 92.

The Sting, once again, tied the game up, but Oliver Castleman, made sure the game didn’t stay tied for long! Scoring his 8th goal of the season, Castleman tapped a pass from Kyen Sopa into the open net to carry a 3-2 lead into the third period.

Early in the third period, the Castleman-Tomasino-Sopa line combined to add more points to their totals. This time, Sopa found Tomasino, who buried the puck into the open cage to lead by a pair.

🚨 GOAL! @philtomasino26 buries one of his own into an open net

🐶 4 | 2 🐝#IceDogs goals are powered by @GetMammoth#Predspic.twitter.com/DNNdjwPKNv

With the IceDogs up 4-2, Akil Thomas added an empty net goal, and his second of the night, for good measure.

Following a solid team effort through 60 minutes, Niagara took this game 5-2 over the hosting Sting.

They return to action tomorrow night as they visit another border city, Windsor, to close out their season series with the Spitfires.

The IceDogs don’t return home to the Meridian Centre until Thursday, December 5, against the Soo Greyhounds, and then host their Ugly Christmas Sweater/Teddy Bear Toss Game on Dec. 7th!