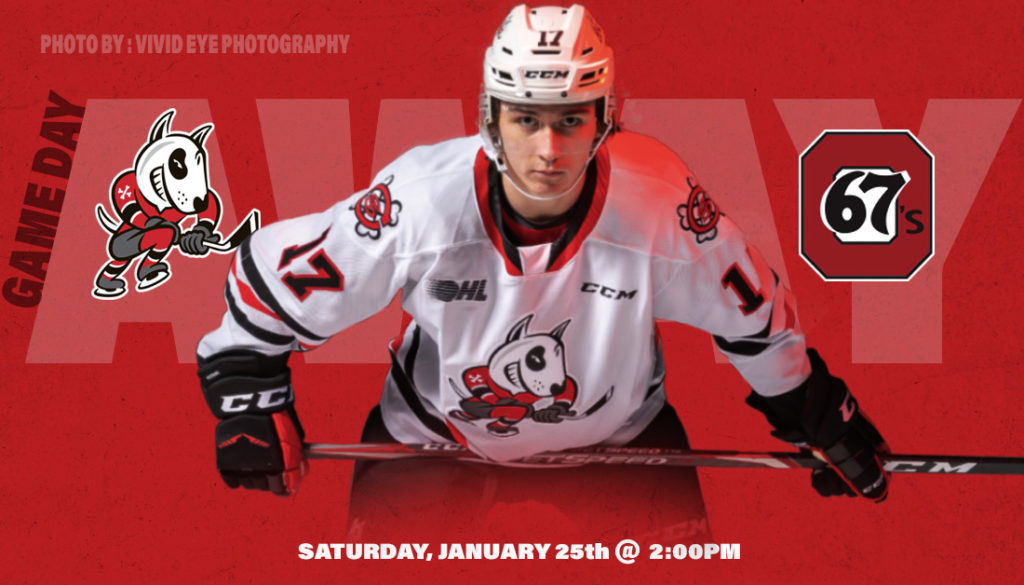 The Niagara IceDogs are back in action Saturday afternoon against the Ontario Hockey League’s top team. Ranked first in the CHL’s top 10, the 67’s will be a tough opponent for the rebuilding ‘Dogs.

Andrew Bruder practiced Friday in a non-contact jersey after blocking a shot with his face Thursday night agains the Mississauga Steelheads. It is not yet known whether or not he will play this afternoon.

The last time these two teams faced off, Giancarlo Chanton scored his first OHL goal. This afternoon’s game will be the first of two meetings for these teams in less than a week, as the 67’s will be in Niagara on January 30th.

The 67’s top scorer Marco Rossi is second in the league with 78 points on the season. 2020 NHL Draft eligible forward Jack Quinn leads the league with 35 goals scored in 41 games this season. Rossi (2nd) and overage defenceman Hoefenmayer (4th) lead the league with 51 and 45 assists respectively. The ‘Dogs are likely to face 67’s backup goaltender Will Cranley, who has 10 wins in 12 starts this season.

Recently acquired centreman Cameron Peters is still looking for his first goal with the IceDogs. In six games with Niagara, he is proving to be a valuable player, against the opposing teams’ top lines. He has 11 shots on net, five of which coming against his former team. He is also showing he’s a reliable player to have on the ice, only with two penalty minutes since the trade deadline.