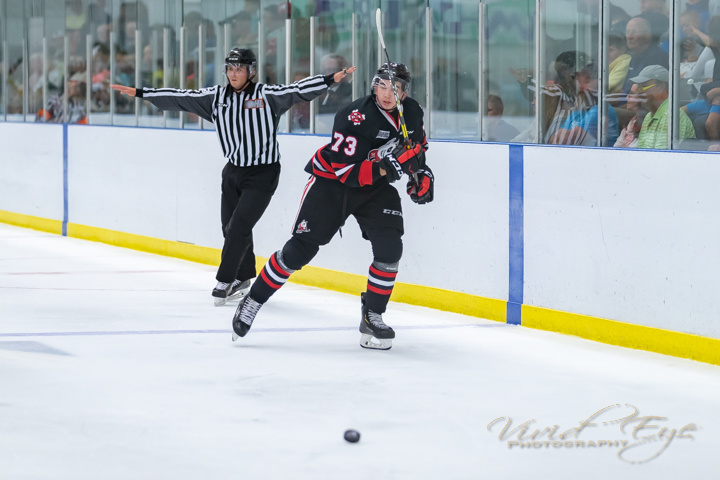 The Niagara IceDogs finished their exhibition schedule tonight in Millbrook, to take on the Peterborough Petes. Last night, the IceDogs brought the Beamsville crowd to cheers, pushing the Petes to a shootout. Niagara was looking to continue that energy tonight.

Midway through the first period, Jake Uberti scored his first of the pre-season to get Niagara the lead. Rookie goaltender Tucker Tynan got the start between the pipes, and stopped all 19 Petes shots.

The Petes evened the score at 1 midway through the second period. Just minutes later, IceDogs pre-season leading scorer, Jonah De Simone scored his league leading 6th goal of the pre-season! Lucas Theriault picked up the assist on De Simone’s tally, for his fifth.

Early in the third period, Uberti picked up where he left off in training camp, extending the Niagara lead to 2. The IceDogs then held a 3-1 lead. Jonah De Simone added another goal late in the game to give the IceDogs the 4-1 win over the Petes!

The regular season kicks off this upcoming Thursday, September 19th, against the Sudbury Wolves at the Meridian Centre. Tickets are starting as low as $10/person and can be purchased online HERE, or in person at the following locations: