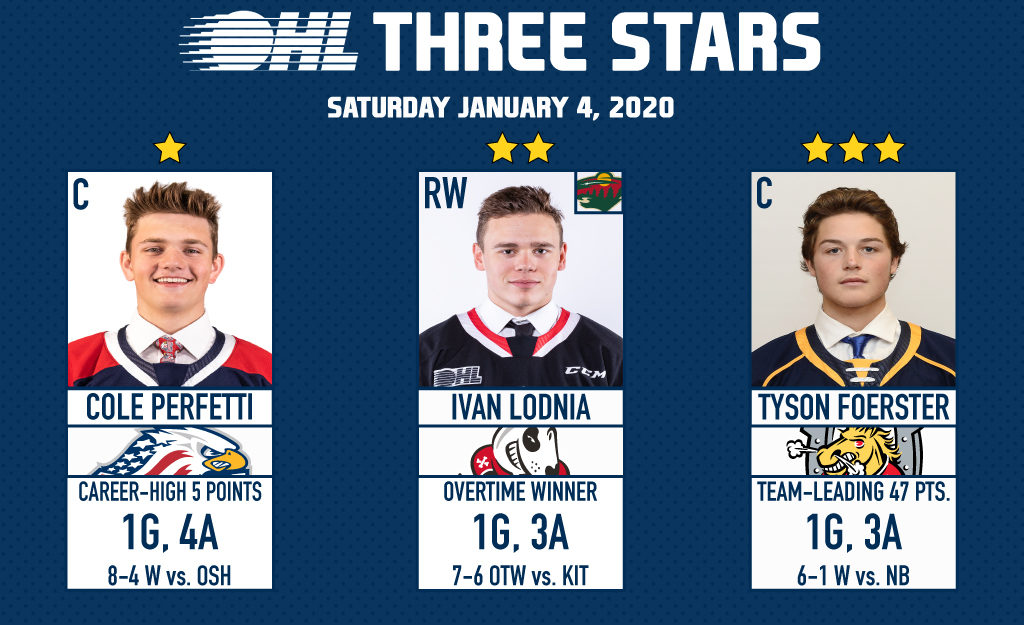 1ST STAR: COLE PERFETTI (SAGINAW SPIRIT) – 1G, 4A
Top 2020 NHL Draft prospect Cole Perfetti had a career-high five points, scoring and adding four assists in an 8-4 Saginaw Spirit win over visiting Oshawa. Perfetti helped the Spirit keep pace with first place Windsor in their quest for the top spot in the West Division, extending his point streak to seven games. The 5-foot-10 centre from Whitby, Ont. leads the Spirit with 61 points (21-40–61) over 36 games this season. He was the fifth overall pick of the 2018 OHL Priority Selection and will compete in the upcoming 2020 Kubota CHL/NHL Top Prospects Game in Hamilton.
• HIGHLIGHTS

2ND STAR: IVAN LODNIA (NIAGARA ICEDOGS) – 1G, 3A
Ivan Lodnia scored the overtime winner on an assist from Phil Tomasino as the Niagara IceDogs edged visiting Kitchener 7-6. Lodnia had a goal and three assists on the night, giving him 10 points over the past two games after Thursday’s six-point showing in North Bay. The 20-year-old from Novi, Mich. has 46 points (19-27–46) through 24 games in this, his fifth OHL season. The Minnesota Wild prospect is two goals shy of 100 on his OHL career and is also approaching the 250-point milestone. He was Minnesota’s third round pick in 2017 and has signed an entry level deal with the Wild.
• HIGHLIGHTS

3RD STAR: TYSON FOERSTER (BARRIE COLTS) – 1G, 3A
Sophomore Barrie Colts forward Tyson Foerster had a goal and three assists in a 6-1 win over visiting North Bay. The native of nearby Alliston, Ont. increased his point total to a team-leading 47 (21-26–47) in 35 games this season. The former third round pick in the 2018 OHL Priority Selection is slated to compete in the upcoming 2020 Kubota CHL/NHL Top Prospects Game in Hamilton.
• HIGHLIGHTS