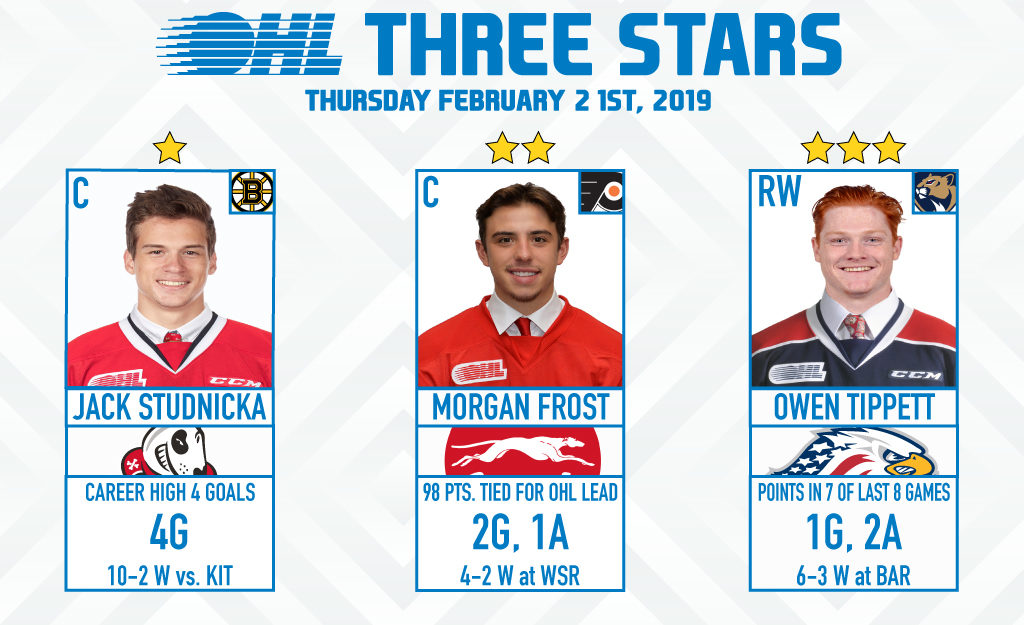 1ST STAR: JACK STUDNICKA (NIAGARA ICEDOGS):
Boston Bruins prospect Jack Studnicka enjoyed a career night on Thursday, scoring four times as the Niagara IceDogs scored a lopsided 10-2 win over visiting Kitchener. Studnicka scored four times on five shots and went 12-for-19 in the faceoff circle, bringing his usual well-rounded game to the ice as Niagara climbed ahead early and never looked back. The 20-year-old from Tecumseh, Ont. has 29 points (15-14–29) over 19 games since joining the IceDogs in January and a total of 63 points (27-36–63) over 49 games this season. The 6-foot-2 centreman is in his fourth OHL season and was a second round pick of Boston in the 2017 NHL Draft.
• GAME HIGHLIGHTS

2ND STAR: MORGAN FROST (SAULT STE. MARIE GREYHOUNDS):
Morgan Frost climbed into a tie for the OHL scoring lead on Thursday, netting a pair of goals while adding an assist as the Soo Greyhounds won 4-2 in Windsor. Frost continued a nine-game point streak, pushing his production to 98 points (36-62–98) over 50 games to pull him into a first place tie with Ottawa’s Tye Felhaber. The Philadelphia Flyers prospect is on pace for a second straight 100-point season and is one point shy of 300 on his OHL career. A 19-year-old from Aurora, Ont., Frost was a first round pick of Philadelphia in 2017.
• GAME HIGHLIGHTS

3RD STAR: OWEN TIPPETT (SAGINAW SPIRIT):
Florida Panthers prospect Owen Tippett pulled out all the stops on Thursday, scoring an nifty between-the-legs goal while adding a pair of assists on goals by rookie Cole Perfetti as the Saginaw Spirit took a 6-3 win in Barrie. Tippett now has points in seven of his last eight games, registering 56 points (29-27–56) over 43 games this season. The 20-year-old from Peterborough, Ont. is one goal from eclipsing the 30-goal plateau for a third straight season. Tippett was Florida’s first round pick in the 2017 NHL Draft.
• GAME HIGHLIGHTS